I've been a Green Bay Packer fan my whole life. It's not my fault, I don't know any better. When you're raised in Wisconsin as I was, it is the law. You must be a Packer's fan or you will be kicked out of the state. I can't talk about what they do to you if you're a Chicago Bears fan.
They're having a phenomenal season this year, currently they are 5-1. Quarterback Brett Favre is breaking records all over the place. But the most intriguing element of the Green Bay Packers is the fans.
The Packers' fan base is famously dedicated, regardless of the team's performance. Every Packers game at Lambeau Field has been sold out since 1960. Despite the Packers having one of the smallest TV markets, the Packers have developed one of the largest fan bases in the NFL. The Packers have one of the longest waiting lists for season tickets in professional sports. The current wait time for season tickets is approximately 35 years. For this reason, it is not unusual for fans to designate a recipient of their season tickets in their wills or place newborn infants on the waiting list after receiving birth certificates.
Packers fans are often referred to as cheeseheads. The term is often used to refer to people from the state of Wisconsin in general (because of its cheese production), but is also used to refer to Green Bay Packers fans in particular. The name originated in 1987 as an insult from Chicago White Sox fans at a Milwaukee Brewers game. In years since and particularly beginning in 1994, the name and the hats called "cheeseheads" have also been embraced by Packers fans.
Here is a cheesehead, in all of his glory. Go Pack!! 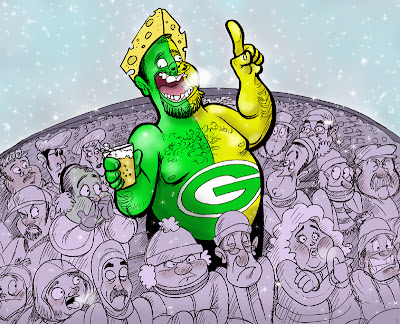 Awesome. I really think you should submit this to a local Wisconsin magazine, or something. Might be your first illo sale!

funny how I swear I see a Kenny freezing his ass off inthe front row...

I was so tempted to send this to Channel 6 (Fox station out of Milwaukee) Figured it would be a good tie in from weather to sports....

I laughed my butt off because I can remember being at a play off game years ago, sitting in the front row of the end zone,before they had perfected the "Lambeau Leap" and I swear half the stadium looked like this guy.....It was new years eve and the temps were below freezing...I guess the beer acts like anti-freeze.

Nice job, bro, you nailed this one! Not only the pic but the whole blog!