Check out this article from the St. Petersburg Times about my brother-in-law Chris. 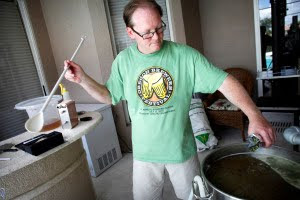 LUTZ — If Chris Johnson offers you a beer, take it. He's one of the best brewers operating — at least in the eyes of the American Home Brewers Association.

The 46-year-old Cheval resident took third place out of 790 competitors in the light hybrid category of the National Homebrew Competition.

"It's a good feeling,'' says Johnson, who entered a rye beer in the contest.

Judges gathered in San Diego in late June to pick the winners from samples sent by contestants from throughout North America. One judge described Johnson's brew as having "a fair amount of rye with good hop bitterness to round it out.'' Another said, "nice rye character, lingering bitterness, finishes somewhat dry, very refreshing.''

Johnson, a business systems analyst, is a founding member of Tampa Bay BEERS, for Brewing Enthusiasts Enjoying Real Suds. He took up the hobby in 1989, when he was an engineering student at the University of South Florida.

It was difficult to find information and supplies then; the federal government had legalized home brewing a decade earlier and the states were following one by one. Fortunately, Johnson discovered some enlightening books on the topic at the USF library. They had been donated by the dean of the engineering college, a former home brew enthusiast himself.

"I was intrigued by, like wow, you can actually do that at home.''

Now he buys his grains, hops and yeast from Southern Brewing & Winemaking, one of a number of well-stocked retailers catering to the nation's home brewing hobbyists. It's an industry that's growing by 16 percent a year, according to Gary Glass, director of the Colorado-based association, which boasts 27,000 members.

Fellow BEERS member Norm Lehman of Temple Terrace notes that Johnson, with his engineering background, understands the science behind the process. Beyond that, he has gleaned a lot of knowledge by assisting the brewmaster at Tampa Bay Brewing Co., the restaurant and microbrewery in Centro Ybor.

"He's been able to translate that down to the home brew world,'' Lehman says.

Johnson describes it as a very rewarding hobby — as long as one follows the guidelines.

"The process is everything.''

To achieve prize-worthy results, he focuses on timing, temperature and the mix, all the while making sure to keep it pure, free from anything that could kill the yeast and spoil the batch. He starts by mixing water and grain in a 20-gallon mash tun. He treats the water first to remove all traces of chlorine, which would make the beer taste like plastic.

Two hours at the right temperature extracts the sugars from the grain, leaving about 14 gallons of malt water.

He boils the malt water for 90 minutes, adding different strains of hops at certain times to create the proper bitterness, flavor and aroma. If he plans to add a spice flavor, he does it during this step.

He pumps the mixture through a heat exchanger to bring down the temperature. At the right time, he adds the yeast. Over the two or more weeks of fermentation, he lowers the temperature in increments, about 5 degrees each day.

He then adds the carbonation, usually by forcing carbon dioxide gas into the mixture.

It's easy to miscalculate. He once brewed a beer for Christmas that he hoped would have a hint of clove. Instead, it was a clove overdose.

"You really puckered up when you had a taste of it."

Congratulations Chris. Save some beer for me!