The Muppets: What the critics are saying 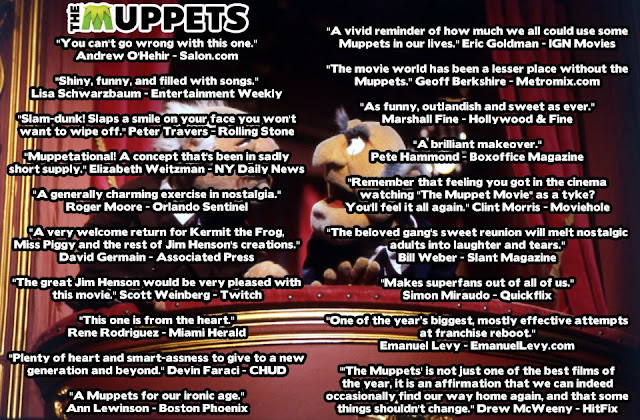 What the critics are saying:
"Effortlessly blending wised-up, self-reflexive humor with old-fashioned let's-put-on-a-show pizzazz, The Muppets is an unexpected treat! Justin Chang - Variety
"You can't go wrong with this one." Andrew O'Hehir - Salon.com
"The movie is just shiny, funny, and filled with songs." Lisa Schwarzbaum - Entertainment Weekly
"Slam-dunk. The movie slaps a smile on your face you won't want to wipe off." Peter Travers - Rolling Stone
"Muppetational, a concept that's been in sadly short supply as of late." Elizabeth Weitzman - New York Daily News
"A generally charming exercise in nostalgia." Roger Moore - Orlando Sentinel
"A very welcome return for Kermit the Frog, Miss Piggy and the rest of Jim Henson's creations after a 12-year big-screen absence." David Germain - Associated Press
"I'm fiercely protective of these old friends, and I believe that the great Jim Henson would be very pleased with this movie." Scott Weinberg - Twitch
"There isn't a single beat in the film that feels crass or opportunistic. This one is from the heart." Rene Rodriguez - Miami Herald
"They still have plenty of heart and smart a-s-s-ness to give to a new generation and beyond." Devin Faraci - CHUD
"A Muppets for our ironic age." Ann Lewinson - Boston Phoenix
"A vivid reminder of how much we all could use some Muppets in our lives." Eric Goldman - IGN Movies
"The movie world has been a lesser place without the Muppets." Geoff Berkshire - Metromix.com
"As funny, outlandish and sweet as ever."Marshall Fine - Hollywood & Fine
"A brilliant makeover." Pete Hammond - Boxoffice Magazine
"Remember that feeling you got in the cinema watching "The Muppet Movie" as a tyke? You'll feel it all again." Clint Morris - Moviehole
"The beloved gang's sweet reunion will melt nostalgic adults into laughter and tears." Bill Weber - Slant Magazine
"Makes superfans out of all of us." Simon Miraudo - Quickflix
"One of the year’s biggest, mostly effective attempts at franchise reboot." Emanuel Levy - EmanuelLevy.com
"'The Muppets' is not just one of the best films of the year, it is an affirmation that we can indeed occasionally find our way home again, and that some things shouldn't change." Drew McWeeny - HitFix