Steve Hearn is one of my dearest friends and is today's Links Spotlight.
Steve is an amazing artist from England who is a source of constant support and inspiration for me. I met Steve at the very first ISCA (NCN) convention I had ever attended in 2003. I remember how I wanted, quite simply, to have my caricature drawn by an international artist. I walked past Steve drawing at a table and found out by reading his name tag that he was from the U.K. I requested a caricature of me by him and he politely obliged. We talked about artwork, fatherhood and other interests we had in common (beer) and instantly became friends.
We made it a point to keep in touch after the convention and did. We attended subsequent conventions together and Steve has always made it a point to visit when he comes to Florida on holiday.

This caricature of Steve (with the unintentionally screwed up Union Jack) was a pivotal piece for me. 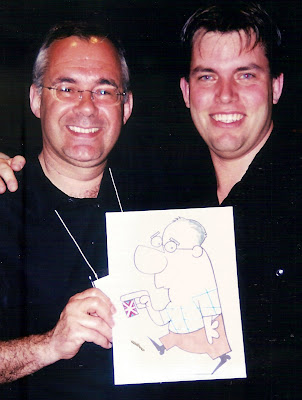 It happened at the 2004 convention when I was frustrated about my drawings and couldn't pin down a "style" that I was happy with. I decided to be true to myself and draw strictly to make myself happy. The caricature of Steve was the first in the series I did, and became the jumping off point, my "EUREKA" moment for the rest of the convention. That year I placed 2nd in Best Cartoon Style. The following year at the 2005 convention, I got 1st place in Best Cartoon Style.
It was at the last convention I attended with Steve in 2006 where I did this caricature of him that I received 2nd place again for Best Cartoon Style. 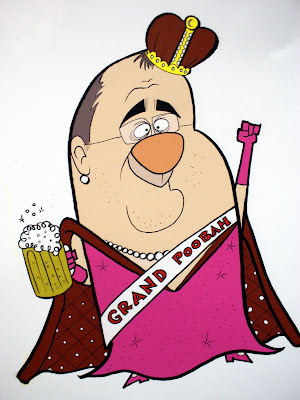 Steve remains my "brother" to this day. Check out his blog to the right or go to: http://www.pencildreams.com/
and hire Steve (and tip him well) at: http://drawn4u.com/
See you soon, brother!
Posted by Kenny Durkin at 12:15 PM

Thank you Kenny for your very kind words! I have that first cartoon you did of me hanging in my studio and everyone who see's it, is always amazed at how AWESOME the drawing is! You rock my bro! I LOVE your art and you are a great inspiration to me, more than you realise! Can't wait to catch up with you and your loverly family in August! Let the good times roll!