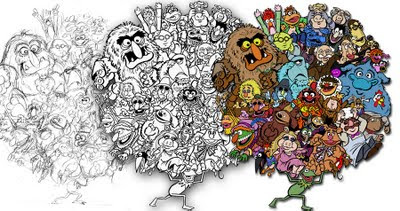 There are only THREE days left for the Threadless Muppets Design Challenge, so make sure to stop over and give me a 5 if you haven't already.

Yesterday I blogged about my early introduction to Jim Henson and his Muppets. I revealed how their path and mine became intertwined beginning with Sesame Street. Today I will pick up where I left off.

I had successfully navigated my way through kindergarten thanks to my previous education provided by Sesame Street. The genius of Jim Henson had affected me in a deep and profound way. He inspired me to not just draw pictures, but to create characters, real characters with histories and personalities. Characters that could easily exist in our world and fanciful characters from who-knows-where.

I was officially a "big kid" and ready to enter first grade. I had become too old for the Sesame Street demographic, but I was going to miss my old friends and wondered how I would ever be able to replace the constant inspiration I received from them. That same year in 1976, a new show came along that picked up where Sesame Street had left off.

Concerned that he would be pigeonholed as a children's entertainer, Jim Henson created a new show that could be enjoyed by all ages, The Muppet Show.

Sesame Street opened the door to my creativity and The Muppet Show loudly and exuberantly barged on through. THIS show was everything to me. As I devoured every episode repeatedly, I also wanted to know how it was done, who made it happen and how the creative process worked. The show itself was full of vaudevillian humor, songs, dances, skits, quiet and tender moments and explosive bursts of chaos. There were guest stars, corny jokes, sly references, things eating other things and anarchy; in short, the perfect show for a fertile, young creative mind.

On a side note, the bathroom in my parent's basement has a wall that has been signed by everyone who has visited it. Here's my signature from 1981: 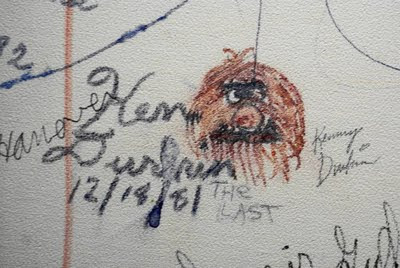 Of course, I HAD to draw SOMETHING. Animal seemed like the perfect choice.

I could seriously go on for days about the perfection of the Muppet Show. There was such CARE given to every little detail and such absolute joy in presenting it. And at the center of it all was Jim. I wanted to be just like him, a gentle, intelligent and creative powerhouse.

The Muppet Show spawned three theatrical movies around the same time another group of three theatrical movies had their first run; Star Wars. My second influence. My favorite parts of that trilogy were the Cantina in A New Hope and the Jabba's palace scenes in Return of the Jedi. The aliens and creatures fascinated me and I became obsessed with how they were designed and operated.

That's when I saw Jim Henson's The Dark Crystal, a film comprised entirely of creatures. It was obvious to me that Jim Henson had somehow been reading my mind all this time. He created Jim Henson's Creature Shop which provided films with realistic and innovative creature effects. He went on to create Labyrinth and his Creature Shop was a huge success at the movies and did amazing work on Jim Henson's Storyteller and the Jim Henson Hour.

Jim Henson was my creative hero. He always pushed the envelope and created on a constant basis. I was sure I would be influenced by his latest achievements for a long time.

(I just spent the last twenty minutes trying to decide what to type next.)

Even now, his death is such a heartbreaking loss to me. I felt that I had lost a kindred spirit, a like-minded soul who seemed to know what I wanted to see and teach me what I needed to be taught. Then he was gone.

Tomorrow, I'll continue with the Muppet's Influence post-Jim and I'll even talk about the future.

REMEMBER my friends, pleeeeeeeease go to the Threadless Muppet Design Challenge and give me a 5!
Posted by Kenny Durkin at 5:49 PM