After I did my initial sketch for The Threadless Muppets Design Challenge it was time to tighten up the pencils so I could start inking. I looked at what I had so far: 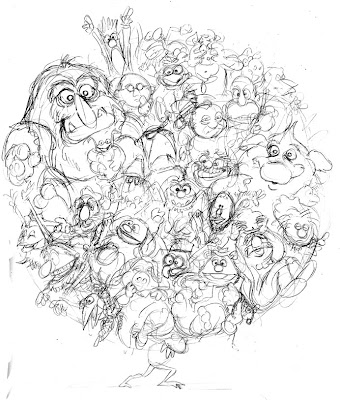 I liked the placement of the characters for the most part. I decided to have Kermit be faced toward the viewer with a more positive expression on his face. I knew I wanted to include Lips, and I moved him from under Thog to over by the band where he belongs. I figured I should include Bean Bunny so I stuck him next to Thog and added Beauregard. I wanted to put Walter, the new character from the upcoming Muppets movie in the piece, so I placed him next to the Jim Henson puppet. Manah Manah and the Snowths are my son Alex's favorites, so I put them above Thog on the right-hand side.

I used the Muppet Show DVDs, the Muppet Movies, a few books and the wonderful Palisades Toys line of Muppets figures as references. This is the final inked piece. 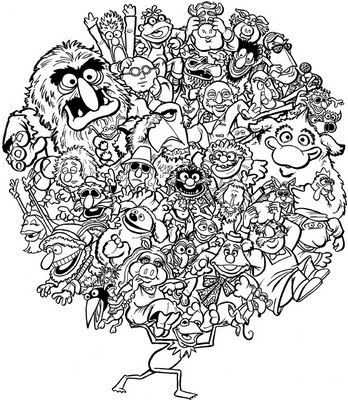 After I inked the drawing, I scanned it, vectorized it and colored it digitally. I'm pretty proud of the way it turned out.
I decided to make a key so you can reference the characters by name (in case you're not sure who's who): 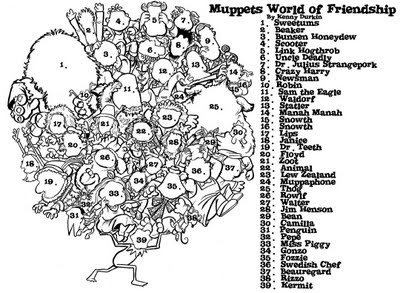 Now that I've outlined how I made the piece, for the next few days I'll be sharing with you why the Muppets and specifically Jim Henson are so significant to me. I'm going all the way back to the beginning of my life. You'll see why they're such an influence to my artwork, and what lies ahead.

There are only a few days left to vote for my artwork at The Threadless Muppets Design Challenge. Go ahead, give me the top score of 5. That's FIVE folks!
Posted by Kenny Durkin at 10:47 AM