I'm a little behind on the Toon Weekly challenges. It's been a busy twelve day work marathon, not that I'm bragging or complaining (or making excuses). It also turns out I NEED a deadline to get anything done. So in an effort to get caught up, I'm not going to bed until I finish last week's challenge.
The challenge this time was to make a superhero. So here he is...
THE MORBIDLY OBESE AVENGER! 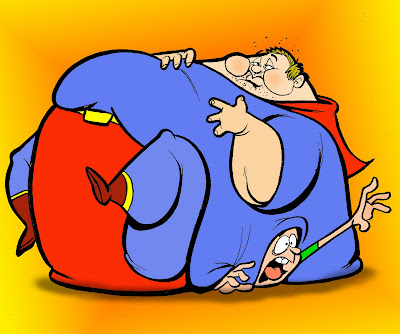 Indiana Jones and the Kingdom of Goosebumps.

Continuing with my geeking out:
My cinematic hero. Is it May 22nd yet?
Posted by Kenny Durkin at 10:13 PM 1 comment:

A wretched hive of scum and villiany.

I am a huge Star Wars geek. I mean huge. But unlike most Star Wars geeks, I try to keep it under control and for the most part, I do.
Star Wars came out when I was 6. It was the first movie I ever remember seeing, and as the film affected the world at that time, so did it affect me. It was (and remains) a highly entertaining story full of mythology and epic themes, awesome effects, space battles, a hint of icky romance and some cool aliens.
The first time I saw the cantina scene I was floored. It was one of those pivotal moments for me in my life. Each creature was more fantastic than the last and although they all had miniscule screen time, they were so interesting and exotic that you could conceivably make a whole movie about each individual alien.
I have to say I was pretty happy when I found out Toon Weekly's challenge for this week was Star Wars cantina aliens. I've been drawing my own versions of the cantina patrons for about 30 years now, they (and Star Wars in general) are one of the reasons I became an artist. So here's yet another in a life-long series of cantina aliens. 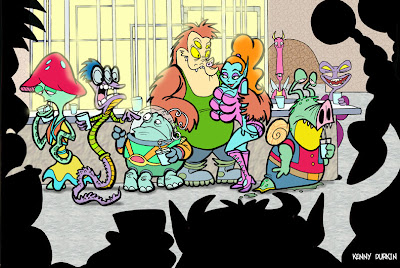 By the way, be sure to visit the new Toon Weekly blog, and if you're an artist, join up and participate! I'll see you there.
Posted by Kenny Durkin at 12:47 PM 9 comments:

This week's Toon Weekly challenge is about anything Medieval. I chose to do a dragon. Or is that dragons? If something has more than one head is it singular or plural? At any rate, here it is: 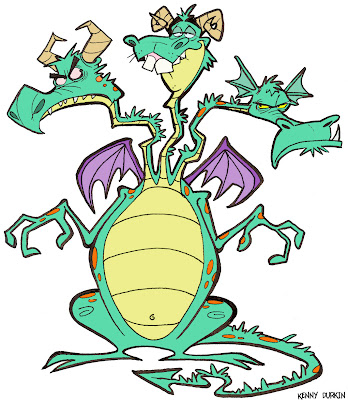 Just goofing around here. These two have nothing to do with each other, I was just having fun with mass and attitude. Maybe I'll color these guys in. 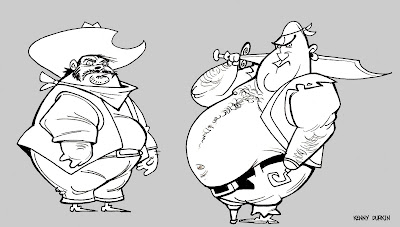