Back in 2005 I started this blog up. One of my first posts was about a story I had been working on called Black Cat Bone. It's about the history and mythology of blues music as told through the life of Kit "Blue-Eye" Baxter, a black cat.
I've never attempted sequential art before and I don't know much more than the average person about comic books and graphic novels. The process of creating something like this was daunting for me. Could I write, draw, ink and color this project all by myself? If I procrastinate long enough, will I ever have to?
Thankfully, I was given the opportunity to attend Wizard World Chicago this year. When I saw my name on the list of artists scheduled to appear, I first lost all bowel control, then decided that was the kick in the pants I needed to get this book going.
I only had a few months to do it. I'm not sure what the usual timetable is for a project like this, but for my first time out, it definitely wasn't enough time. Nevertheless, I have completed issue #1 of Black Cat Bone. It's certainly not perfect, and I have the option of going back and changing things indefinitely if I want to. But it's not bad and thanks to Barry and Thomas at Ka-Blam it looks GREAT printed up. 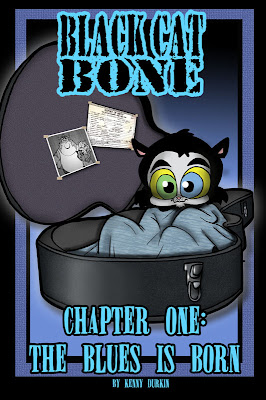 I've learned a lot these past few months. The next issue will be much easier for me. I'm actually looking forward to getting it started. But first, Wizard World!

I'm going to be set up with Michael "Locoduck" Duron. He will be selling some of his awesome stuff too and we've collaborated on a pinup book of geeky favorites. I'll be there all day every day of the convention, so if you're in the area, stop by. I'd be happy to see you.
P.S. An interesting anecdote: In spring of 2008, before I moved to Florida to be a full-time artist I attended my first convention ever, Wizard World Chicago. Here I am 8 years later attending the same exact convention, this time as an artist set up at a table. Coincidentally, Barry and Jenni Gregory were also at the 2000 con in Chicago, although I didn't know them at the time, and Barry will be at Chicago this year as well. Small world indeed.
Posted by Kenny Durkin at 9:35 PM 2 comments:

I was just taking a break from inking issue one of Black Cat Bone when I got online and found out the news. Blues pioneer Bo Diddley has died in his Archer FL home at the age of 79. 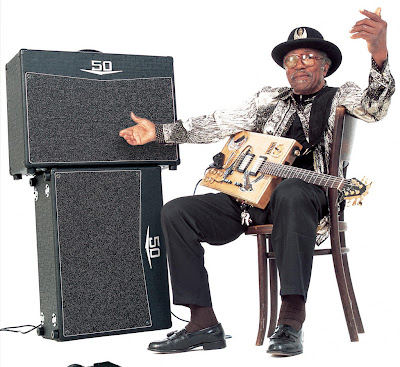 Bo was a seminal figure in music history, influencing everyone from Elvis to the Rolling Stones to the Clash. His "Bo Diddley beat" is all over rock and roll, even today.

A sample of his work is "Who Do You Love" (later covered by George Thorogood). The song's lyrics invoke swagger and bravado today's rap "music" can only hope to emulate.

I walk 47 miles of barbed wire,
I use a cobra-snake for a necktie,
I got a brand new house on the roadside,
Made from rattlesnake hide,
I got a brand new chimney made on top,
Made out of a human skull,
Now come on take a walk with me, Arlene,
And tell me, who do you love?
Tombstone hand and a graveyard mine,
Just 22 and I don't mind dying.
I rode around the town, use a rattlesnake whip,
Take it easy Arlene, don't give me no lip,
Who do you love?
Night was dark, but the sky was blue,
Down the alley, the ice-wagon flew,
Heard a bump, and somebody screamed,
You should have heard just what I seen.
Who do you love?

Arlene took me by my hand,
And she said ooowee Bo, you know I understand.
Who do you love?