Posted by Kenny Durkin at 10:45 AM No comments:

Our local Down Syndrome Foundation of Florida is having their 2nd Annual Tour of Champions Valentine's Bowl-a-thon event this February 12th. The Foundation is all about "striking" Down barriers to inclusion and I'd LOVE for you to sponsor our bowling team, Durkin's Dragons! 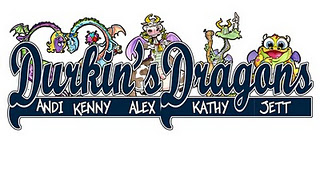 Simply click this link to sponsor us:
http://bowlathon.net/event/DSF_Florida_2012/donate.
All donations are tax-deductible.
Last year Durkin's Dragons raised over $1,000, and we'd love to do it again this year! Especially since each team that raises over $1000 is eligible to participate in the grand prize drawing for an iPad!

Jett would greatly benefit from having an iPad (and maybe have some fun with it too!).


The Foundation is run 100% by volunteers so all proceeds go directly to families for scholarships and programs!  Last year they raised $50,000 -- $34,000 went towards scholarships and $13,000 went towards programs.  It is their goal to raise more money this year so they can support the growing number of scholarship requests and implement some additional programs such as Lose The Training Wheels and iCan Work program.

Jett has gotten many scholarships from DSFF for his speech therapy evaluations, swimming classes and therapeutic Gymboree classes.
We're currently at $325, about a third of a way to our goal of $1000. If you can, please sponsor us. We'd appreciate it!
Posted by Kenny Durkin at 11:44 AM No comments: 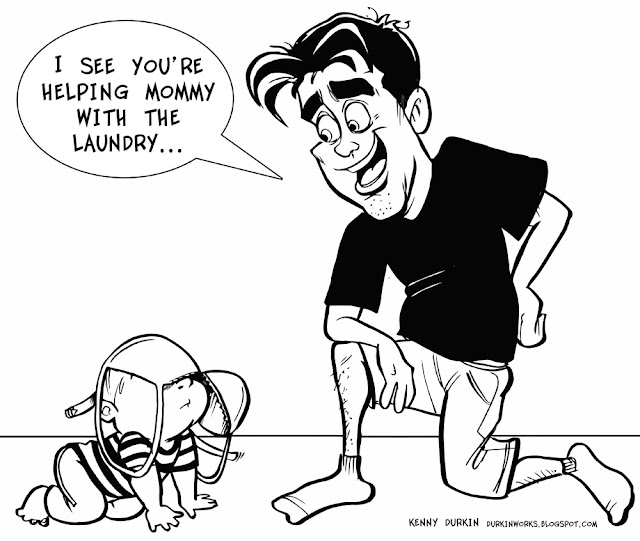 Posted by Kenny Durkin at 1:43 PM No comments:

A few items about Martin Luther King, the first by the greatness that is Readeez:

The second, via Amy Julia Becker:

"I share Dr. King’s dream. It’s a dream about what Jesus called the kingdom of God, the place where heaven comes to earth, where what is good and right and true overcomes jealousy and corruption and selfishness and greed. I share this dream as men and women continue to work for reconciliation among the races. I share this dream as women and men address the concerns of inequity among the social classes in America. I share this dream as women and men fight for the rights of fellow human beings trapped in slavery and oppression around the globe. Finally, I share this dream for my daughter with Down syndrome, and for all the other sons and daughters in this nation and around the world who live with a disability.
I have a dream for them.
I have a dream that individuals with disabilities, be they cognitive or physical, will be seen as a normal part of the human community, with needs and with gifts to offer.
I have a dream that one day, little girls will not be denied a kidney transplant from the best children’s hospital in our country as a result of being labeled “mentally retarded.”
I have a dream that the systematic abuse and degradation of people with disabilities in state institutions will cease.
I have a dream that the word “retarded” will fall out of use by comedians and that major news outlets will begin to use people-first language. I have a dream that the way we talk will reflect the reality that individuals with disabilities are citizens with equal rights and equal value to every other member of our society.
I have a dream that our government will provide the 25 million dollars promised in funding
to support the Prenatally and Postnatally Diagnosed Awareness Act (also known as the Kennedy-Brownback bill) to provide women with up-to-date and accurate information about prenatal tests. For four years, that Act has remained unfunded while at the same time the government has provided millions of dollars to research and develop prenatal tests which often lead to the abortion of fetuses with disabilities.
I have a dream that parents of typical children will desire the inclusion of children with disabilities in classrooms across the nation because of the mutual benefit to all children involved.
I have a dream that abortions based upon a prenatal diagnosis of Down syndrome will cease not because they have become illegal but because mothers and fathers feel empowered and encouraged to choose life, because doctors and genetic counselors see the great potential of individuals with Down syndrome and communicate those possibilities to frightened family members.
I have a dream that the children with the most severe disabilities will be received as gifts by our entire community, that we will learn to care for, and receive from, everyone in our midst, regardless of cognition, strength, or skill.
I have a dream that we will stop asking, “What can s/he do?” and instead ask, “What does s/he love?” I have a dream that we will learn to love one another regardless of ability.
I too have a dream."
Posted by Kenny Durkin at 10:53 AM No comments:

Boys and their toys... 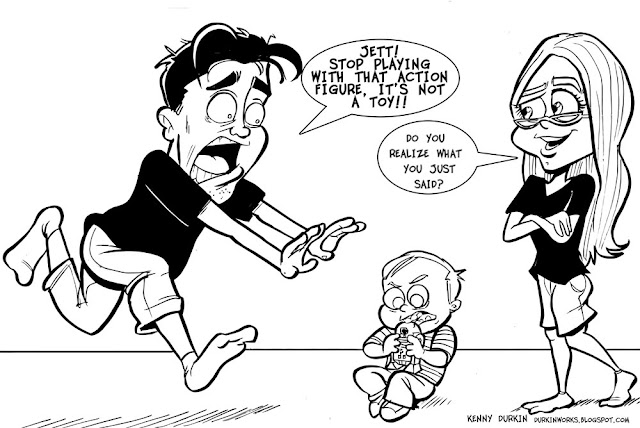 Posted by Kenny Durkin at 11:40 AM No comments: 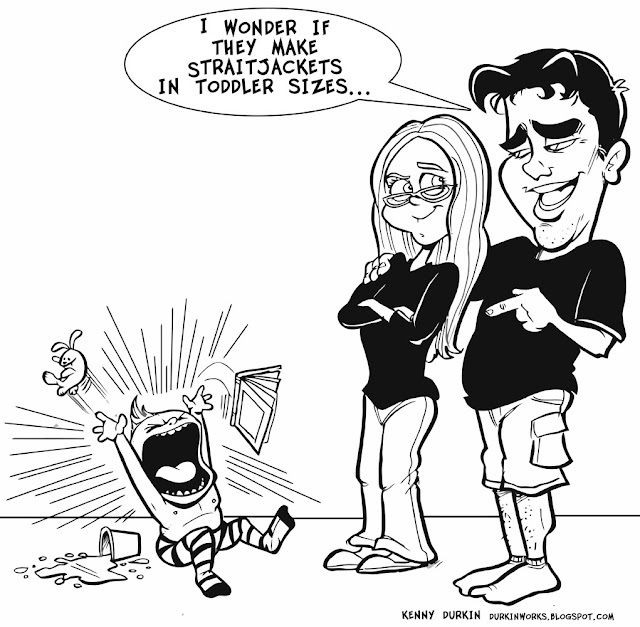 Posted by Kenny Durkin at 2:54 PM No comments:

I am one of the artists contributing to the Throwback Video Game Art Show at the Belle Isle Yacht Pub in Orlando FL. 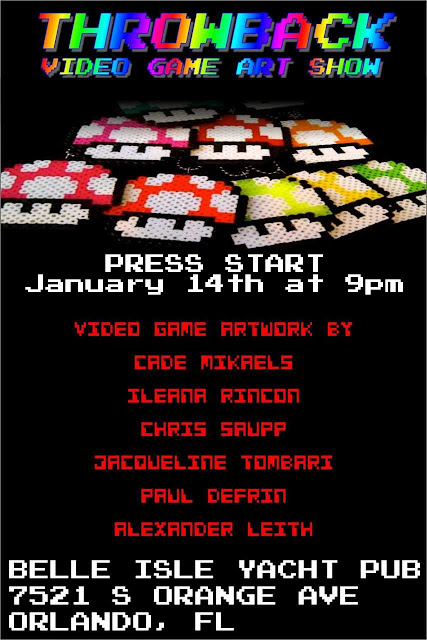 The show opens this weekend. My submission is based off of a piece I did for a collaborative pinup book I published with Mike "Locoduck" Duron.

For the art show, I wanted to revisit this theme, but instead of traditional line and digital color, I wanted to make the artwork larger and more dimensional. I used foamcore and acrylic paint and cut the shapes to create layers. The final piece is roughly 24" X 36". 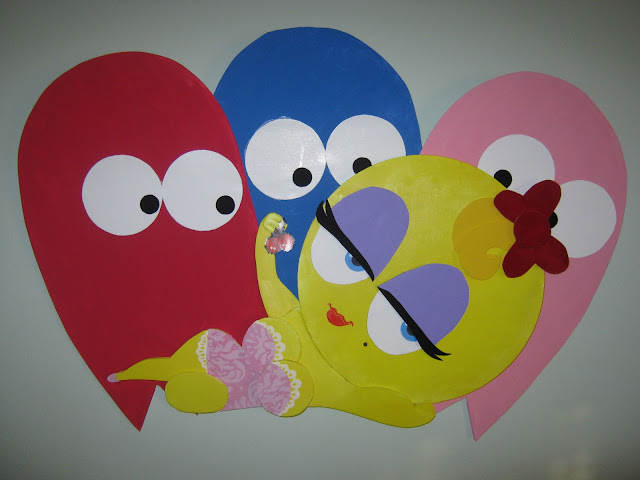 I liked working with the foamcore and cut paper. I learned a lot with this piece and I think you'll see more stuff like this from me in the future.
To learn more about the show, and to see the piece in person, go to:
http://bssart.com/post/13549660239/throwback-video-game-art-show-belle-isle-yacht-pub
Posted by Kenny Durkin at 11:27 AM No comments:

Not a fan of fans. 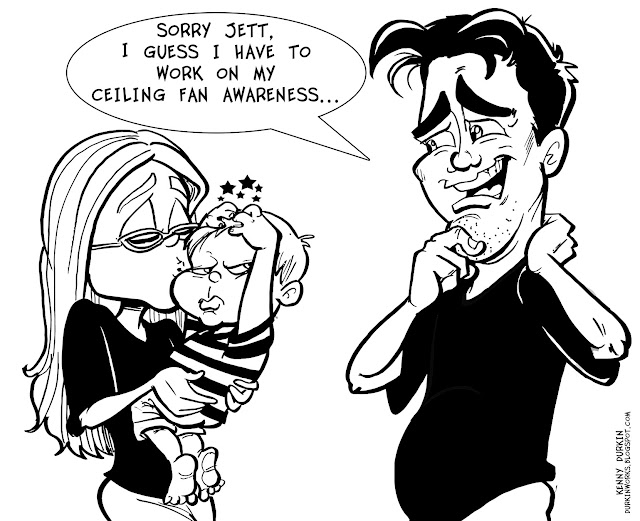 Posted by Kenny Durkin at 11:29 AM No comments:

How Jett rolls (or unrolls)... 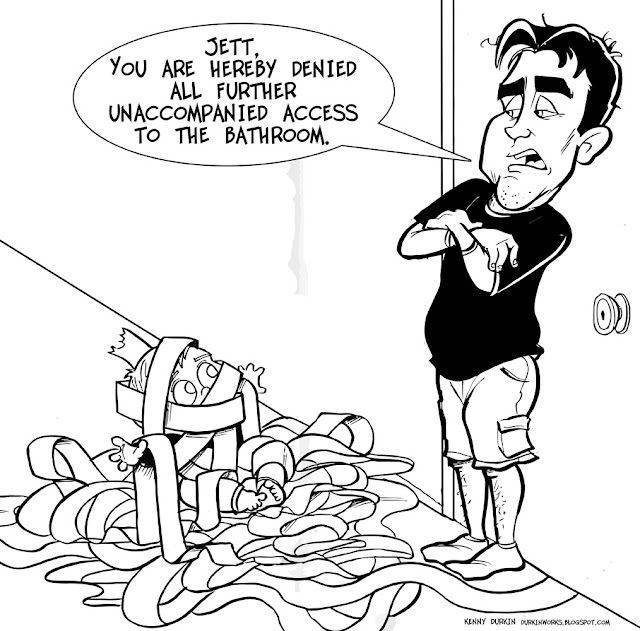 Posted by Kenny Durkin at 8:29 PM No comments:

Andi has a blog called Down Syndrome: A Day to Day Guide. In it, she chronicles and organizes her exhaustive research in the treatment of Down Syndrome. I have a link to her site in the column on the right.


She has just set up a Facebook page as well. You can see pictures of Jett, and get up to the minute information regarding supplements, therapies, diet and other areas related to Down Syndrome. If you're on Facebook, please join in and watch a true pioneer at work: 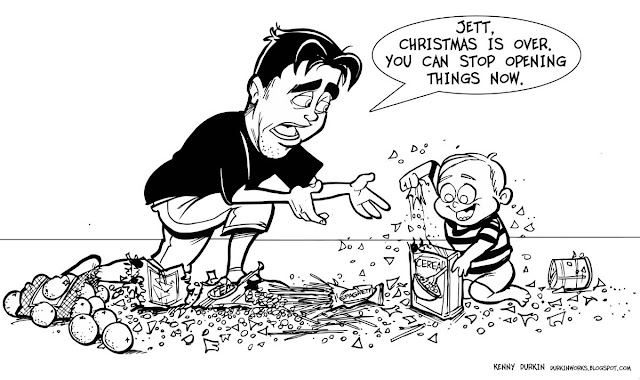 Posted by Kenny Durkin at 11:39 PM No comments: 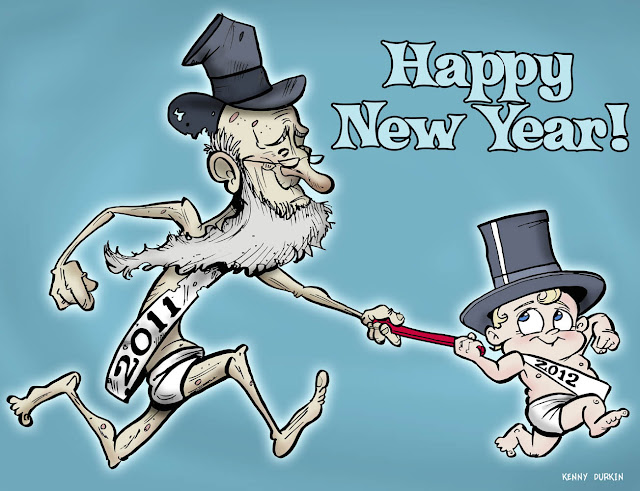 That's it. 2011 is over. If you've been following this blog for a while, you know what a bad 2010 I had. In contrast however, 2011 was a phenomenal year full of growth and opportunities. I went back and looked at my daily posts of the year and found that I had accomplished far more than I intended and experienced things I had never dreamed possible. Here's my 2011 year in review:

I started the year off with a broken computer. But thanks to my good friend Chris Brown who repaired it, it's still working today. The Green Bay Packers won the Super Bowl. I updated Durkin's Dragons: Parodies and Tributes and created a whole new book, SCRAPS, both of which I sold at Megacon. I started the Blog Buttons you see on the right and participated in Toon Challenge over on Facebook. I lost my wallet and got it back two weeks later. I attended Star Wars Weekends several times and rode the new Star Tours over and over. I participated in the Threadless Muppet T-Shirt Design Challenge. I debuted Geeky Friday on the blog. I also began Muppet Monday. I started my new comic Durkin Droppings. I wrote and illustrated my story Dead Charlie and Zombie Bob for Dark Mischief. My aunt Theresa passed away. I went to Wisconsin to attend the Kenosha Festival of Cartooning. I turned forty. Three of my art pieces were displayed in my first art gallery show. I went to the screening of The Muppet Movie at the Orlando Puppet Festival and had the honor of meeting Heather Henson, one of the highlights of my year. I entered a design into the Mighty Fine Muppet t-shirt contest where I placed and had my design printed. I briefly attended the ISCA convention. The Muppets triumphantly returned to the big screen. I drew a LOT, created a LOT and had one of the most productive and artistic years of my life.

So I ended the year on a high note, but my journey is only beginning. There are already major plans in the works for 2012.

That's about all I can tell you about right now, but when I'm able to share more, you'll be able to see it right here on this blog.

And speaking of the blog...

For over two years I have posted EVERY SINGLE DAY. It's been very fulfilling for me and has proven that if I commit to something and set my mind to it, I can do anything. But the popularity of blogs is declining and the new focus is on online networking sites like Facebook. I've been increasing my presence on Facebook for the last few months and I really enjoy the instant feedback and wide-ranging audience of friends, family and fans. It's an easier interface for people and makes me more accessible. My focus going forward is to continue posting more on Facebook, Twitter and other sites.
That means that I will no longer be posting on this blog every single day. I will be posting as much as I can, and when times are busy it may in fact be every single day. So if you're on Facebook or Twitter and haven't linked up with me, you can click the links to the right and get up to the minute info from me that you may not get instantly right here.

Thanks to every one of you for a fantastic year. I look forward to 2012. It's going to be amazing!

Posted by Kenny Durkin at 12:21 PM No comments: