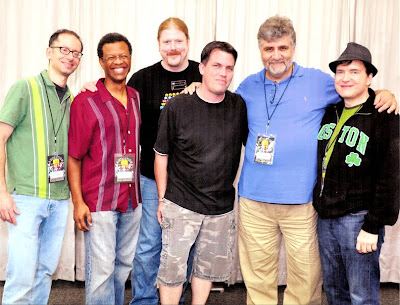 Saturday, I had the chance to hang out with some of the talent involved with one of my favorite shows, Futurama. From the left is David X. Cohen, executive producer and head writer. Next is Phil LaMarr, who voices Hermes and others. He was on MadTV, acted in movies like Pulp Fiction, and was the voice of Samurai Jack, Wilt from Foster's Home of Imaginary Friends, Green Lantern on Justice League and has tons of other vocal credits.

Next to him is John Dimaggio, the voice of Bender and other characters. Among many other characters he's voiced are Dr. Drakken from Kim Possible, Aquaman on Batman: The Brave and the Bold, and Marcus on Gears of War. Also he's completely insane.

To my left is Maurice LaMarche. On Futurama, he plays Lrr, Kif, Horrible Gelatanous Blob, Morbo and even the headless body of Spiro Agnew. He's done decades of voice work including the Brain from Pinky and the Brain, Yosemite Sam from Looney Tunes, Egon from The Real Ghostbusters and many more.

On the far right is Billy West, voice of Fry, the Professor, Zapp Brannigan, and Dr. Zoidberg. He's yet another long-time vocal veteran with credits including Bugs Bunny and Elmer Fudd from Looney Tunes, Woody Woodpecker, both Ren and Stimpy, and Doug from..well, Doug.

I got some autographs as well. Futurama thankfully, has been renewed by Comedy Central for 26 more episodes. I wish everyone involved with this show the best of luck and I look forward to seeing (and hearing) more of their amazing work.
Posted by Kenny Durkin at 1:01 PM

You got to meet Maurice LaMarche AND Billy West! Man...