It all started innocently enough…

A few months ago, when I was still a caricature artist at Disney World, I had yet another shift of endlessly drawing little girls as princesses and mermaids. Frustrated, I came home CRAVING the need to draw something I was satisfied with. I rarely watch TV, but decided to flip through the channels to find some interesting faces. I came upon a marathon of A&E's show Duck Dynasty. Now THESE were some great faces!

At first glance, I figured it would be pretty easy to caricature these guys. All of them had long hair, some sort of headwear, and long beards.  The challenge for me was to capture their differences. What became immediately apparent, was their unique personalites. They weren't just funny, they were smart and highly entertaining.

I watched episode after episode and decided to do a group shot of the four main characters and the matriarch of the family, Miss Kay. 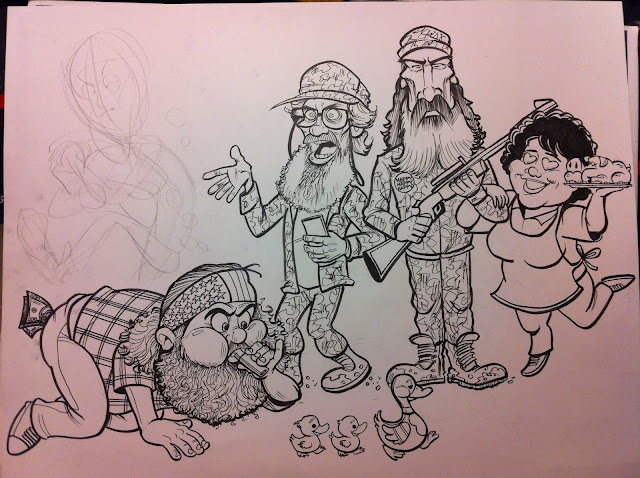 I inked the piece. 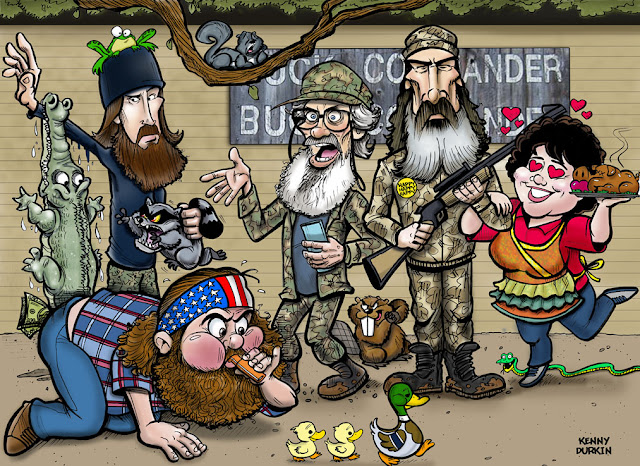 Then, as usual, I scanned it and colored it in Photoshop.
I was pretty proud of it, so I posted it in the usual places, this blog, Deviantart, Twitter, and of course Facebook. A friend of mine shared it on A&;E's official Duck Dynasty Facebook page. And that's when it happened... 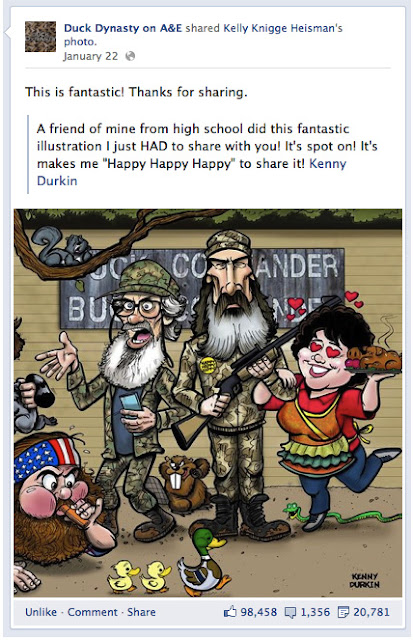 Over 98,000 likes, 20,000+ shares and over 1,300 comments. With every share, more comments, more likes and more shares. It went viral, permeating message boards, Pinterest, and even spawning bootlegs. The positive response was overwhelming! I received a ton of requests for prints and T-shirts of the caricature. I held out for the right response, and I got it when I was contacted by the official apparel licensee for the show. They wanted to use the image for t-shirts and merchandise and even wanted me to create all-new images based on the show. After some negotiations, we were on our way.

It was decided that the first image was to appear on boy's shirts, so Miss Kay, the hearts and the gun would have to go. I removed them and replaced the gun with a fishing pole and tackle box. 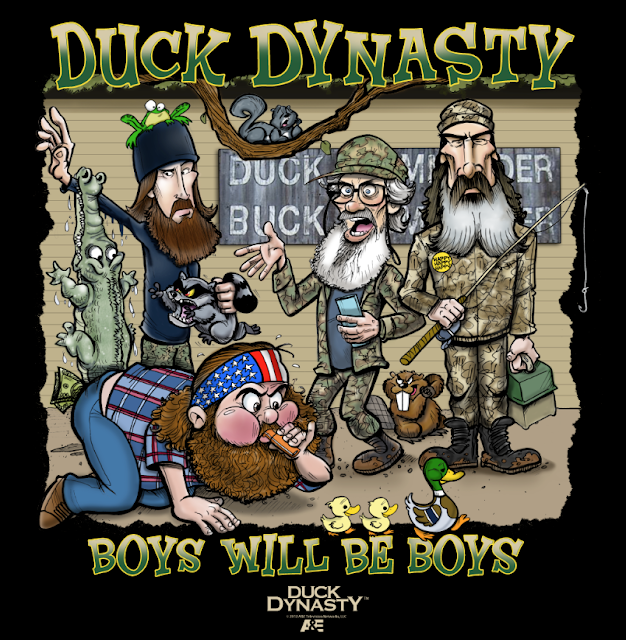 This image has actually been spotted in the WOMEN"S department of Walmart, on a khaki shirt. Let me know if you see it (and take some pics)!

The second image I created was Si, Phil and Jase in a monster truck. Here's the sketch; 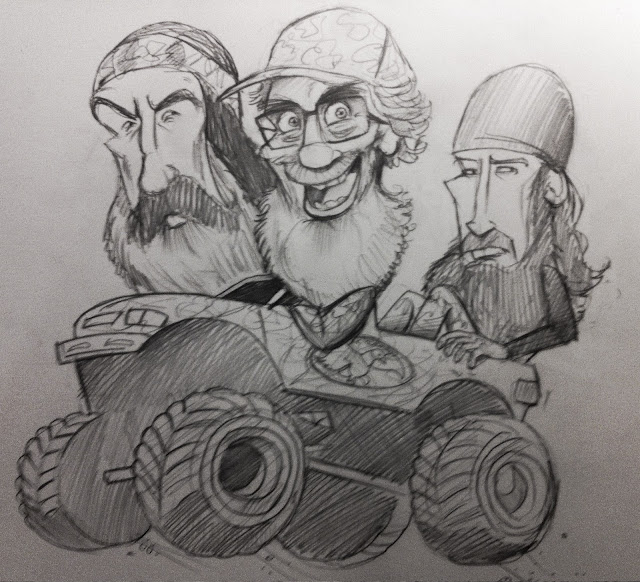 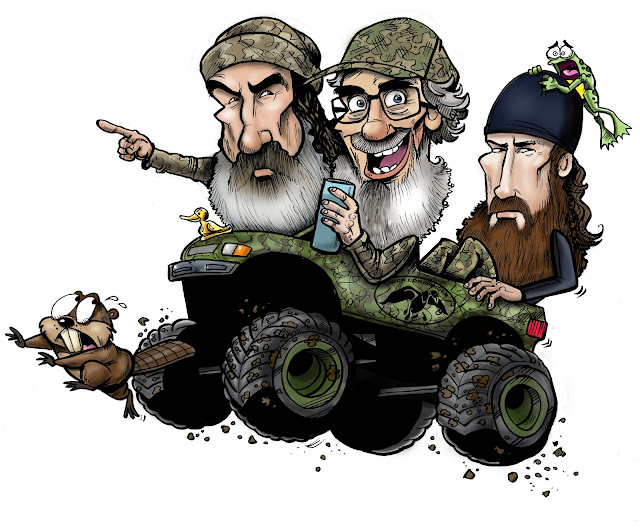 This image is currently available at Walmart. It's been spotted in the sporting goods section, in electronics by the DVDs and in the Men's department, both with regular merchandise and on special displays like this: 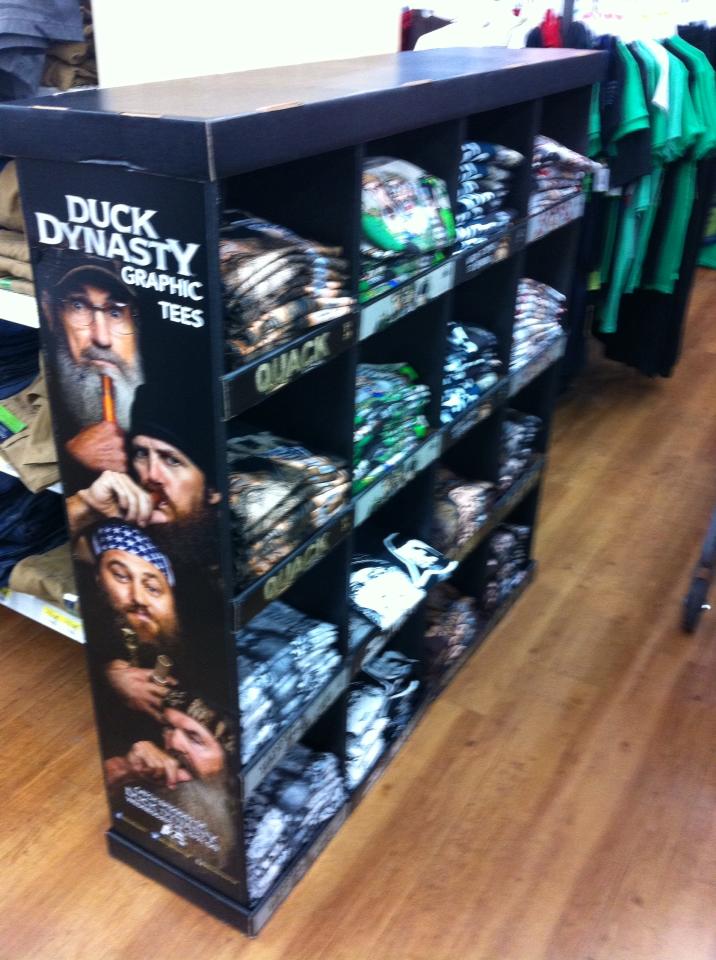 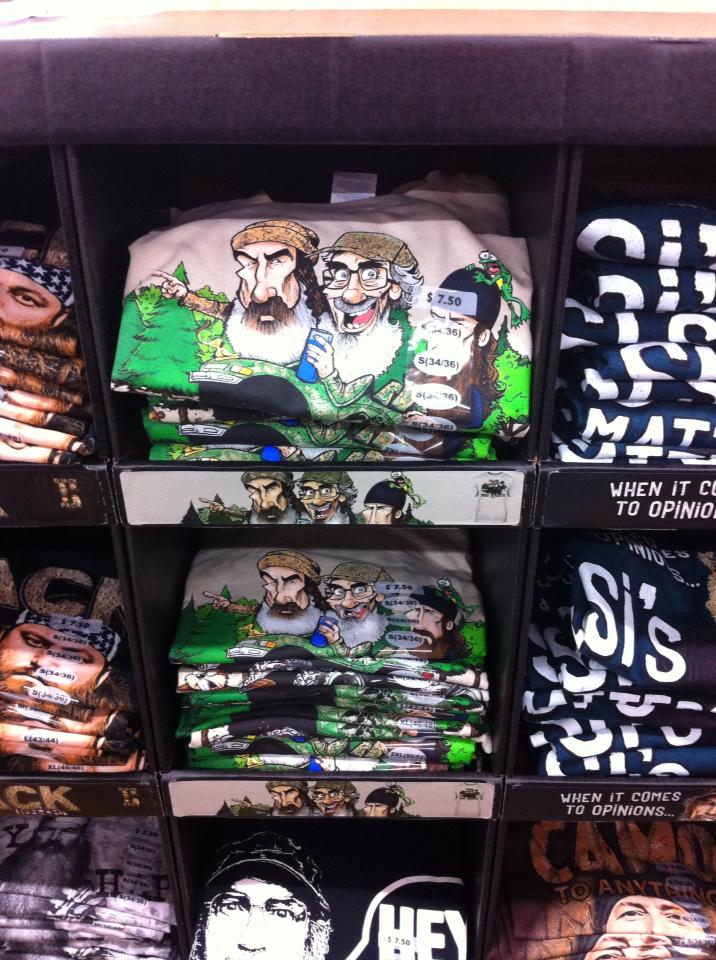 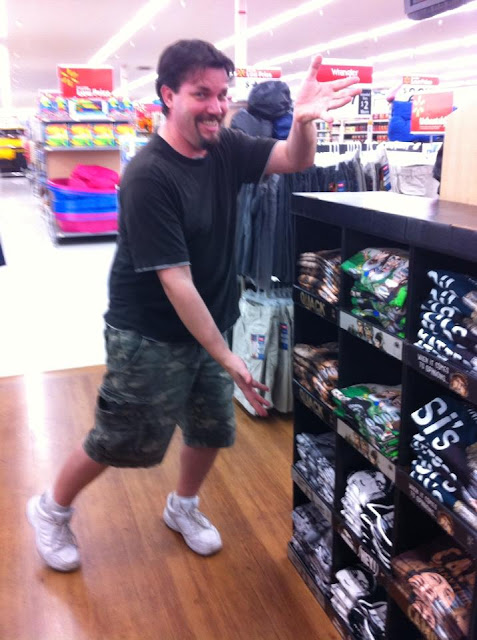 I can't tell you how exciting it is to have artwork featured in the #1 retailer in the world. It's very surreal and hasn't really sunk in yet. It's like an out-of -body experience. So awesome to see one of my designs enjoyed by everyone!
Posted by Kenny Durkin at 2:22 PM

First time I've been here in a while, Kenny. Great work! Big time!