I'm still riding the wave that was the 2014 National Cartoonists Society Reuben Awards. The weekend was held May 23-25th in San Diego. I can't begin to tell you how amazing it was, but I'll try to do my best. 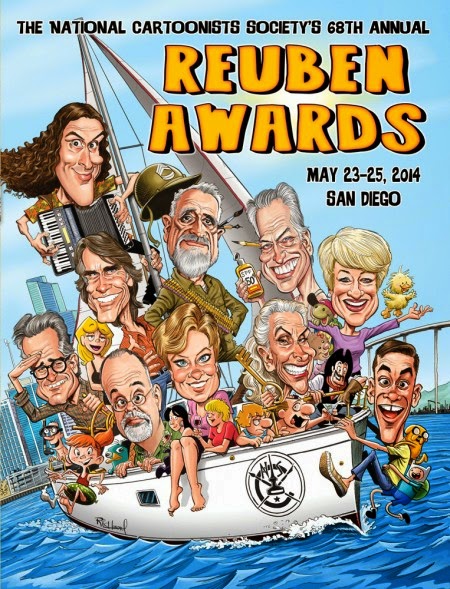 After an early flight out of Milwaukee and a quick changeover in Phoenix, I arrived in San Diego at around 10 a.m. Friday the 23rd. After a short shuttle bus journey I arrived at the Omni Hotel. It's located next to Petco Park and is just a brief walk to the San Diego Convention Center. My room was up on the 7th floor. I was travelling sans wife and kids, so I had the whole place to myself. 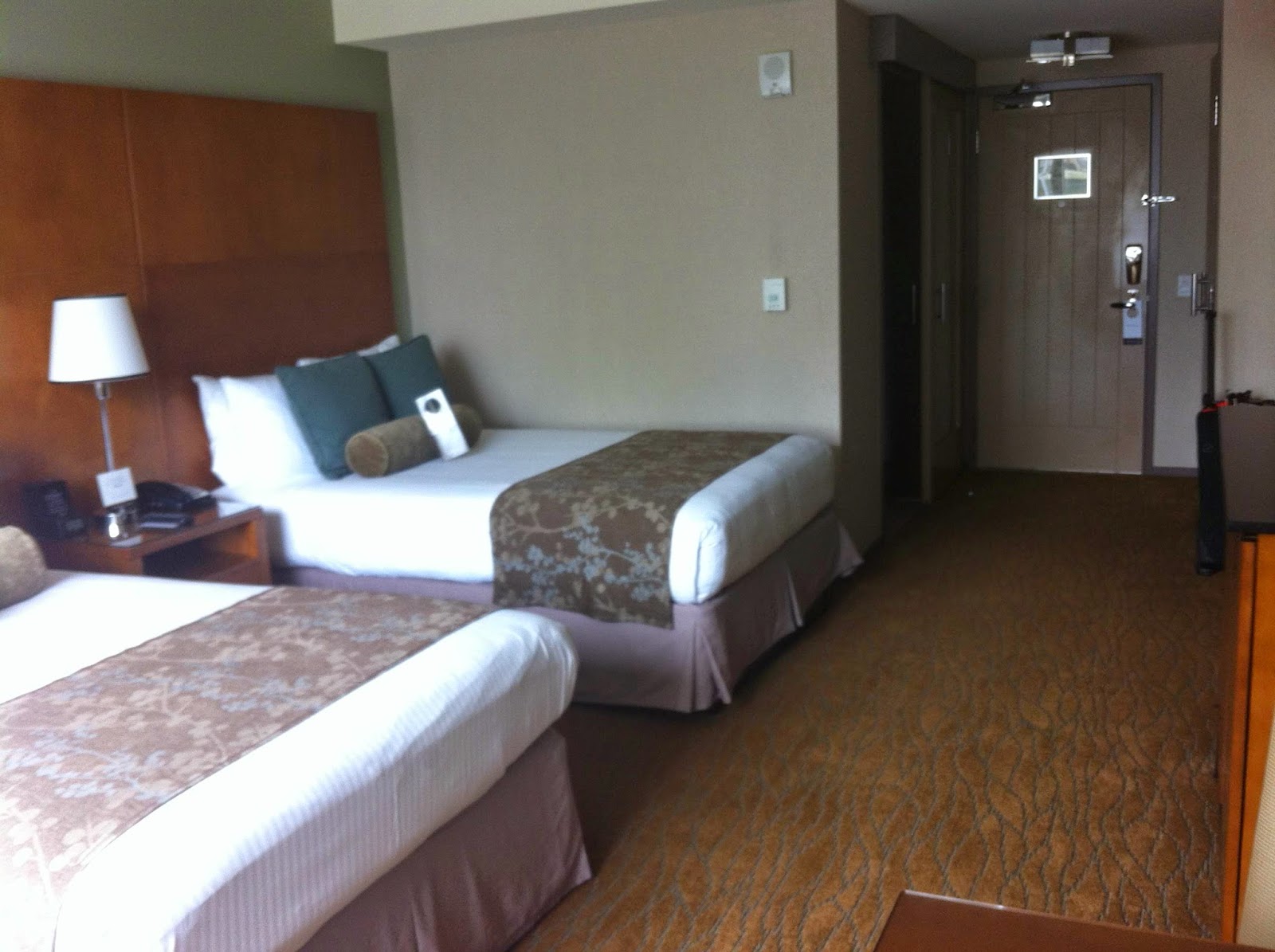 I only slept on one bed the whole time and through force of habit, only on one fourth of that bed. 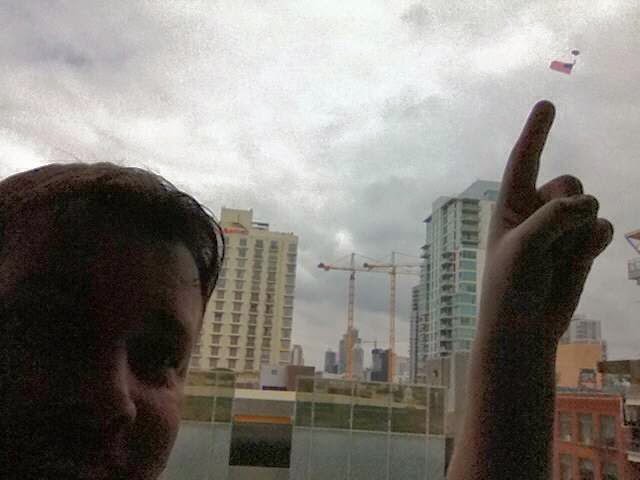 When I opened the shade to see the view, I saw a paratrooper entering Petco Park. Must've been game time! 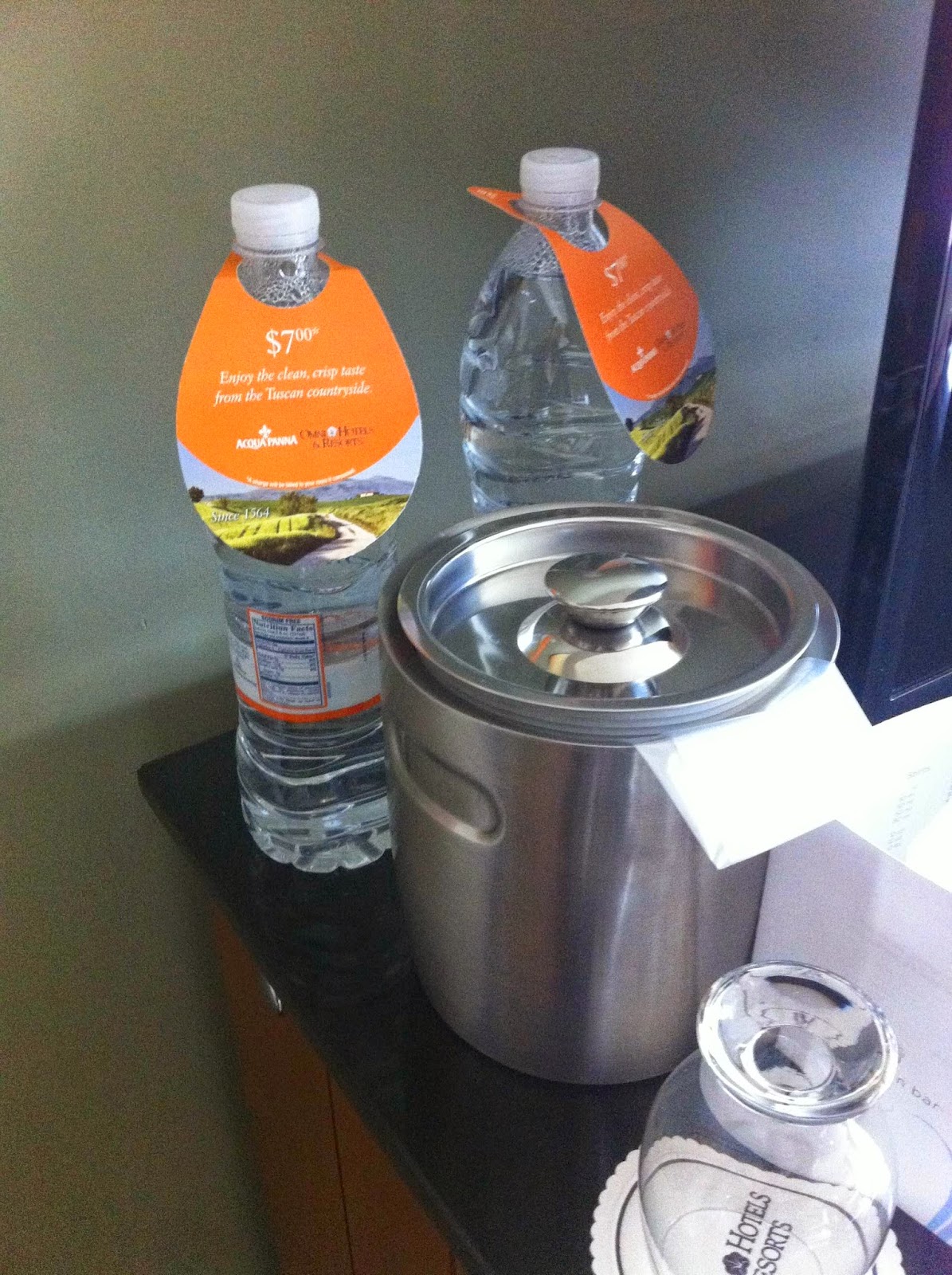 Here are the seven dollar waters that were in the room. For seven bucks, they should render you invisible or give you the ability to fly (or at least have alcohol in them). 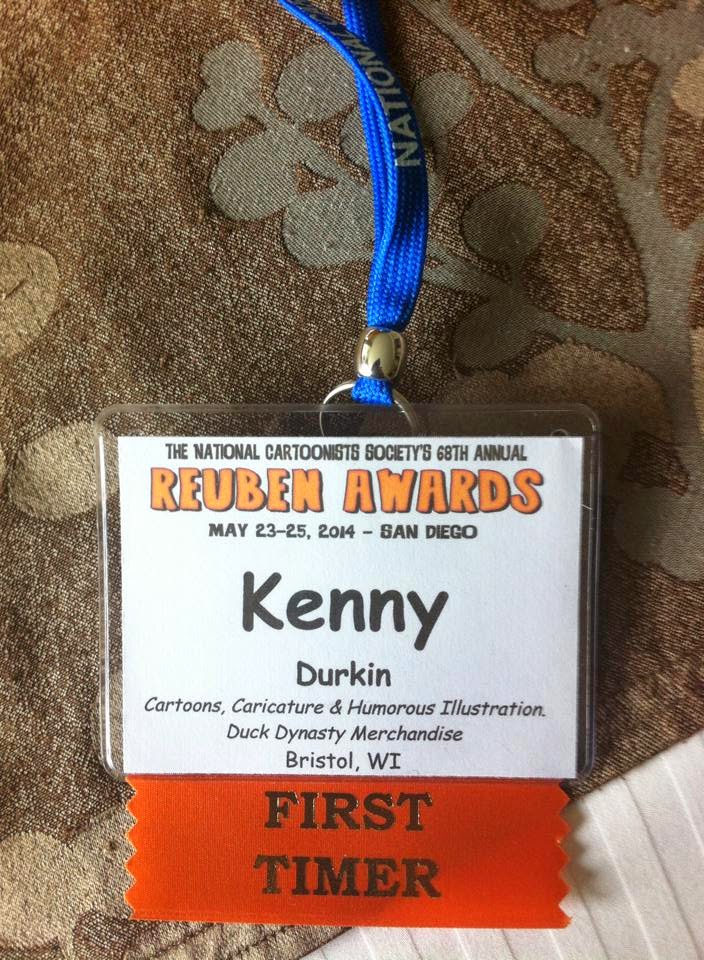 I went downstairs to the registration desk and got my name badge. These were to be worn at all times and came in real handy. At first, I was reluctant to add the "First Timer" flag to my badge, but I was glad that I did. Everyone was so welcoming and friendly, they would cross the room to shake hands and introduce themselves if they found out you were a "newbie". I was blown away by the hospitality. 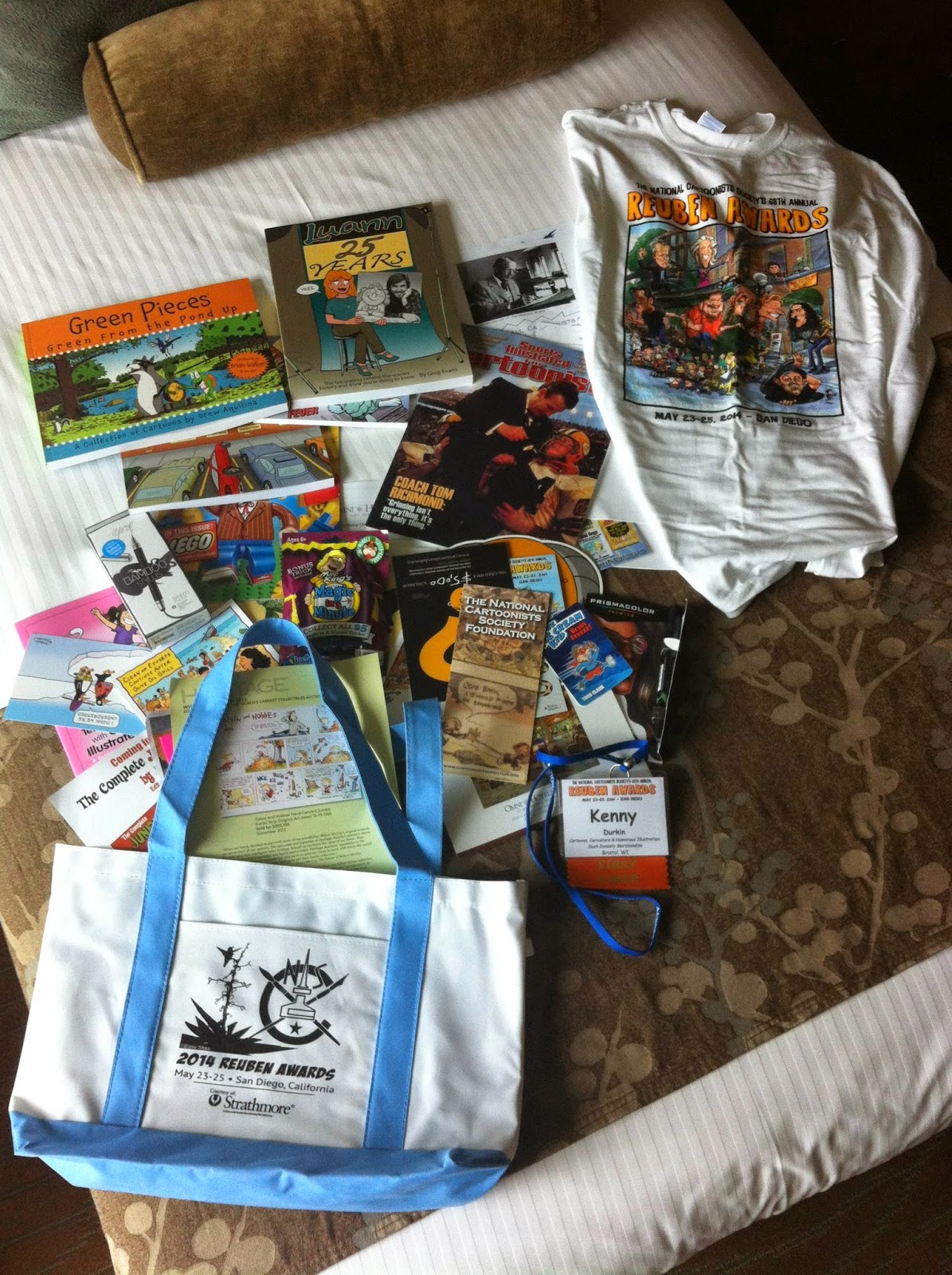 In addition to the badge, I also received my "goody bag", which was filled with books, pamphlets, art material samples and all kinds of giveaways and treasures.


After dumping everything off in my room, I ran back downstairs to meet up with some dear friends. 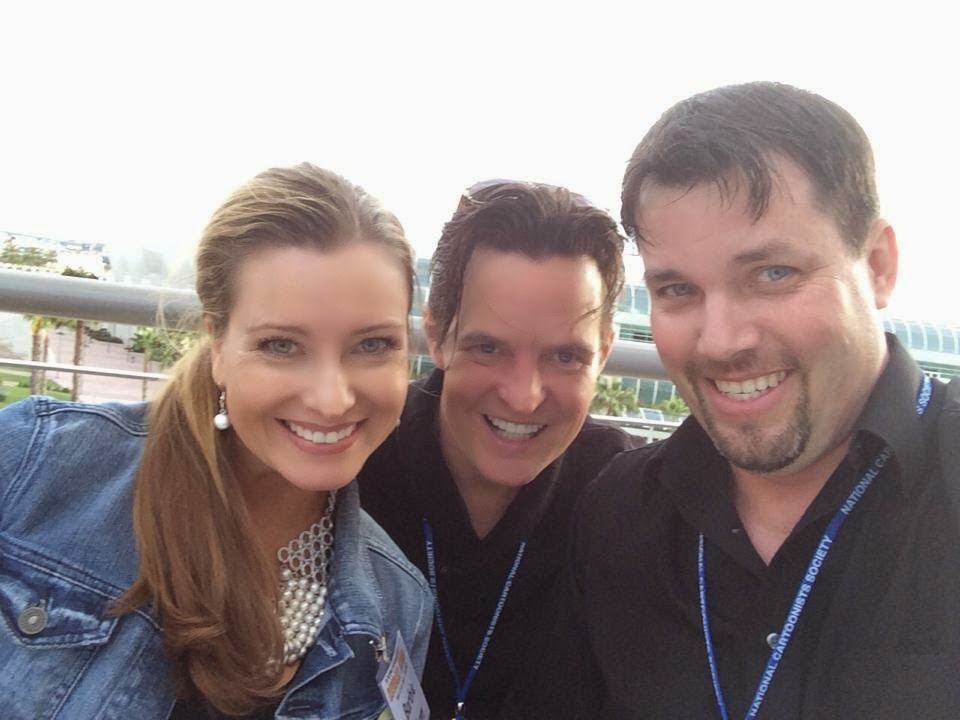 I worked for them drawing caricatures for Caricature Connection in Disneyworld for 13 years before moving back to Wisconsin. I love these two, and it was great to get caught up with them. They were always nearby, checking in on me throughout the weekend, making sure I was taken care of. Some things never change! 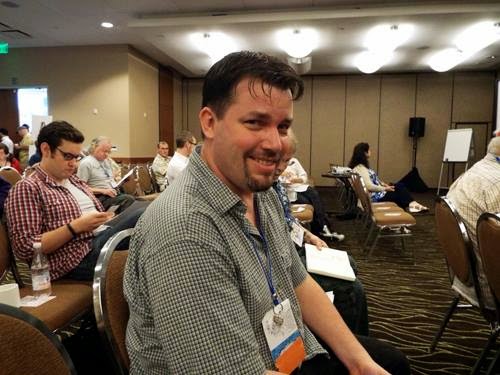 Then I caught a few seminars. The first was Eddie Pittman who does an online comic called "Red's Planet".
Eddie was hysterical, and when he started talking about Star Wars and Indiana Jones, I knew we were cut from the same cloth.

Next seminar was Chris Houghton. Chris is the National Cartoonists Society 2009 Jay Kennedy Scholarship Award winner and between his comic book, illustration and animation work has accomplished more in the twenty-something years he's been alive than most cartoonists do in a career.

The last seminar I attended Friday was Greg Evans. Greg's comic strip is "Luann", and his seminar was peppered with anecdotes about failed concepts and screw-ups during the strip's 29 year (so far) run. I always like hearing stories like this. They reinforce that even highly successful artists are prone to setbacks and mistakes.

I had to go back to the room to change for the New Members Reception, a private event for newbies like me, and as I moseyed up to the bar on the Palm Terrace I was immediately greeted by seasoned members of the NCS who shook my hand and asked if there was anything I needed, or anyone I wanted to be introduced to. I was moved by the acceptance and generosity. The New Members Reception morphed into the Welcome Party, where the rest of the members joined us for dinner and cocktails.

I had been travelling all day and was overwhelmed and had a bit of sensory overload, so I skipped the late karaoke party, my head buzzing with excitement and inspiration.

The next morning I was first in line for the NCS Buffet Breakfast. I shyly sat alone at a table, but soon I was joined by my new friends Wayno and Kim, and we talked about art, freelancing, music and life. 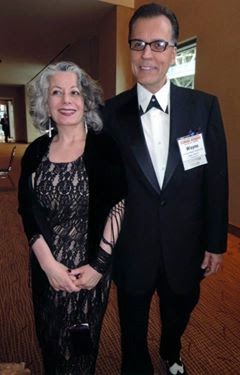 Wonderful people and I'm proud to call them my friends.

Next up was the business meeting, then lunch. I checked out Sanda Bell-Lundy's seminar and went back to the hotel room to rest up for the banquet.

I managed to get my tux on, with all my buttons intact and my bow tie straight and headed down to the awards banquet. 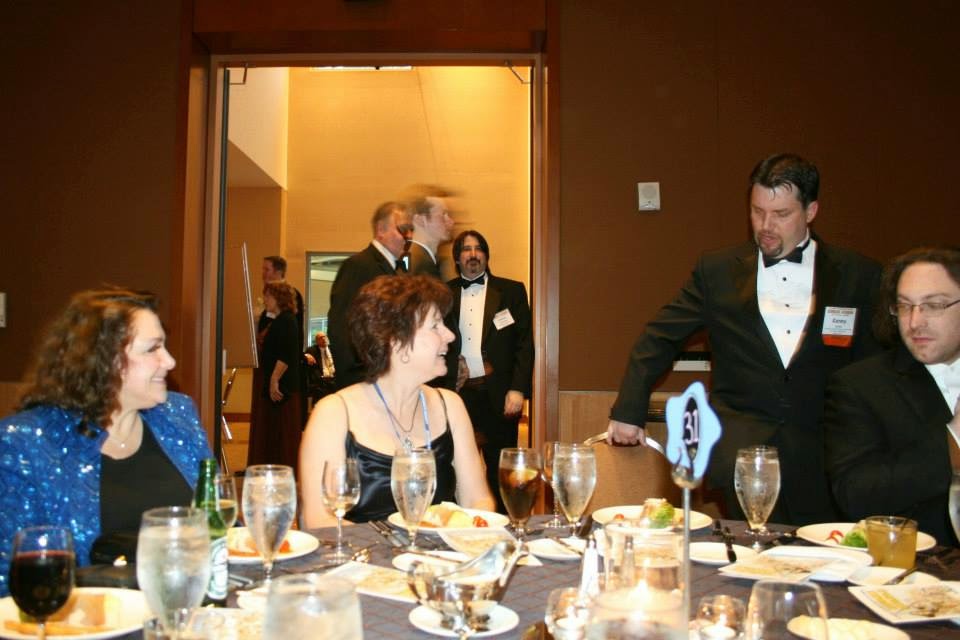 I was seated at what seemed to be the farthest table from the stage, but that meant I was also closest to the restrooms, a fact that I took full advantage of.

The awards ceremony was a top-notch production, emceed by Emmy award-winning comedy writer and cartoonist of "The Doozies", Tom Gammill. It was funny, irreverent and highly entertaining.


One of the highlights of the Reubens for me, was meeting the winner of the A.C.E. award (Amateur Cartoonist Extraordinaire). The award is presented to a celebrity who wanted to be a cartoonist but ended up following a different career path and becoming famous for another reason. In the past, it's been given to such people as Carol Burnett, Jackie Gleason, Orson Bean, Ginger Rogers, Al Roker, Denis Leary and Morley Safer. It's not awarded often, so I was lucky to witness this year's recipient, Weird Al Yankovic.  Al was as wide-eyed and grateful to be there as everyone else and I've never met a famous person more patient and giving when it came to taking pics and signing autographs. 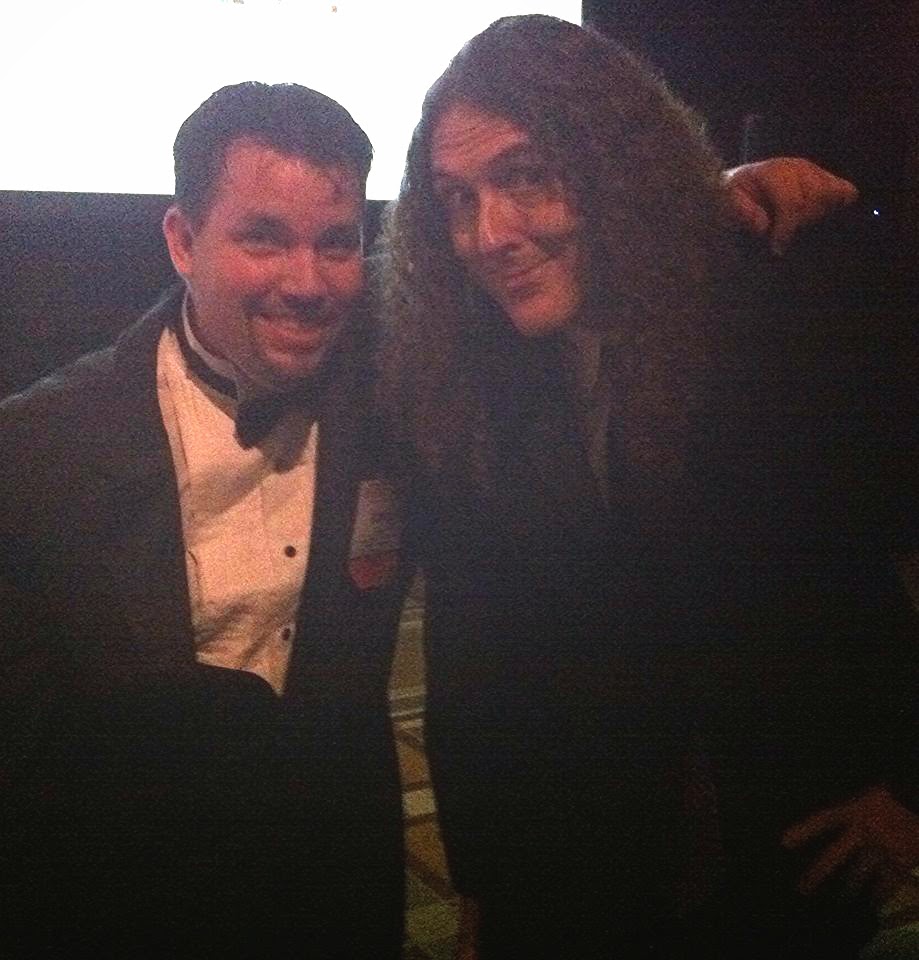 Me and my close, personal friend, Al.

That would have been enough for one evening. But then table-buddy Jack Pittman introduced me to one of my heroes, Sergio Aragones. I've always loved his "marginal drawings" in MAD magazine and I followed him over to the comics with Groo: The Wanderer. He's one of the world's fastest and funniest cartoonists. 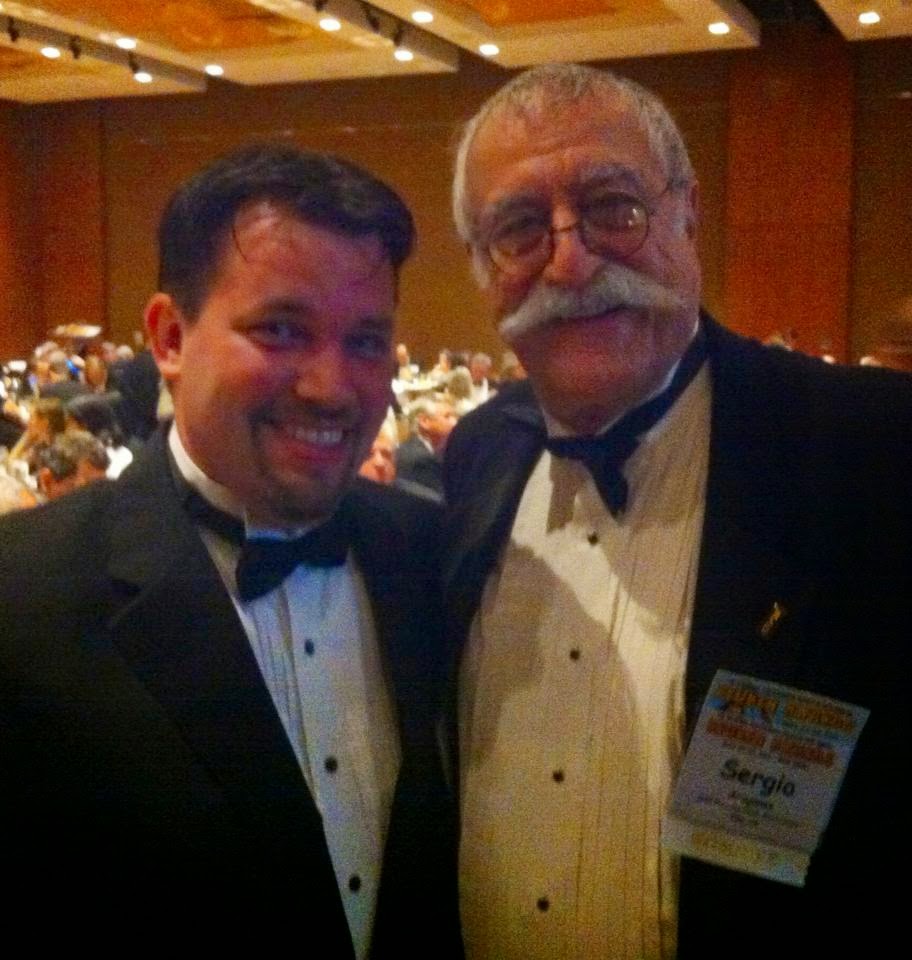 Me and Sergio Aragones. I could have sat on his lap and listened to him tell stories for hours.

A few more from the evening. 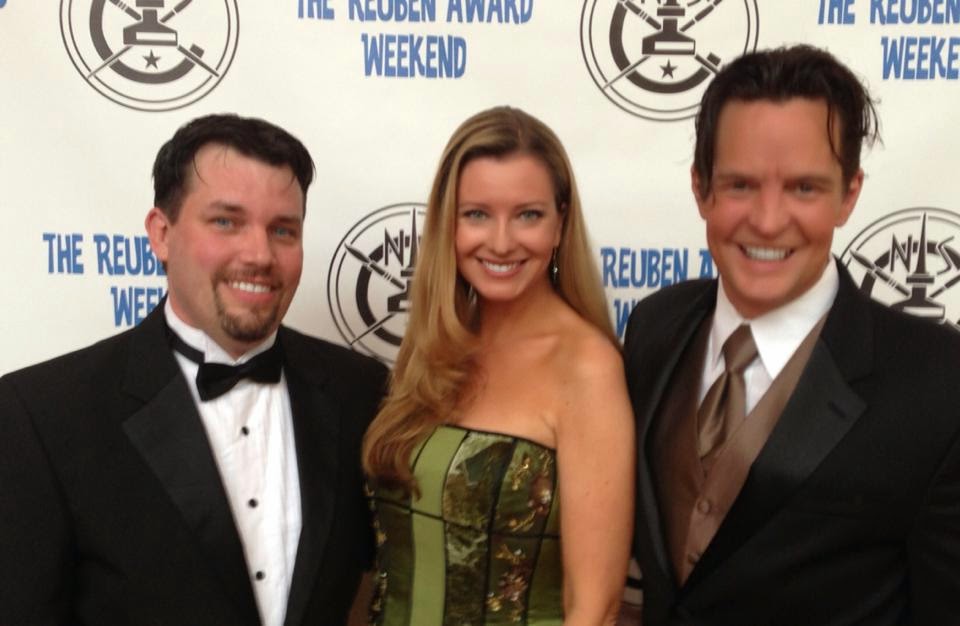 Me, Barbie and Keelan Parham. We clean up nice. 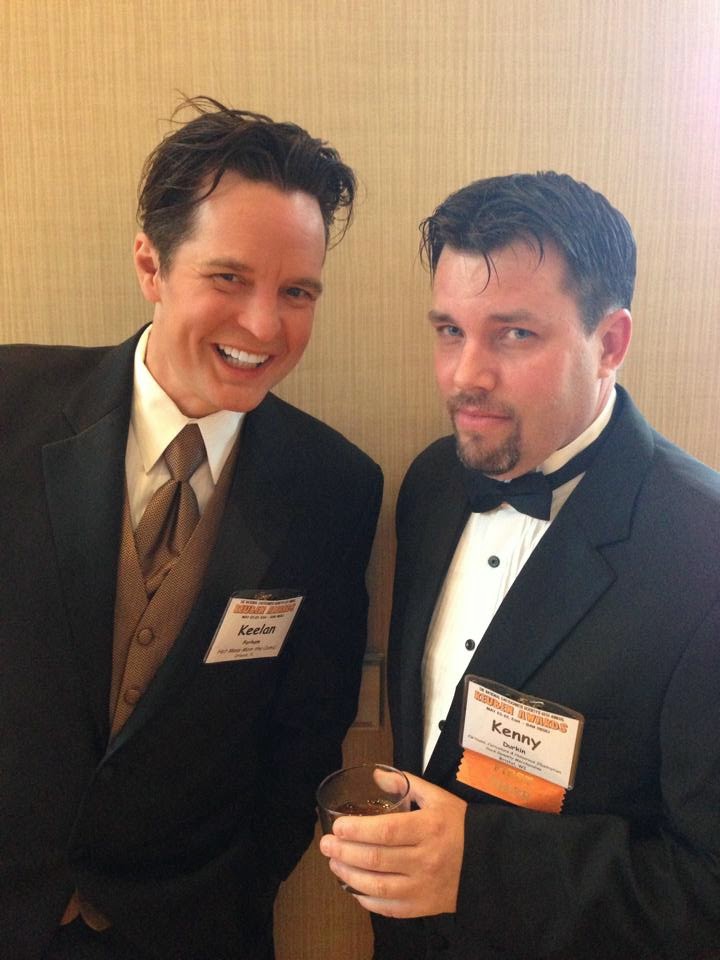 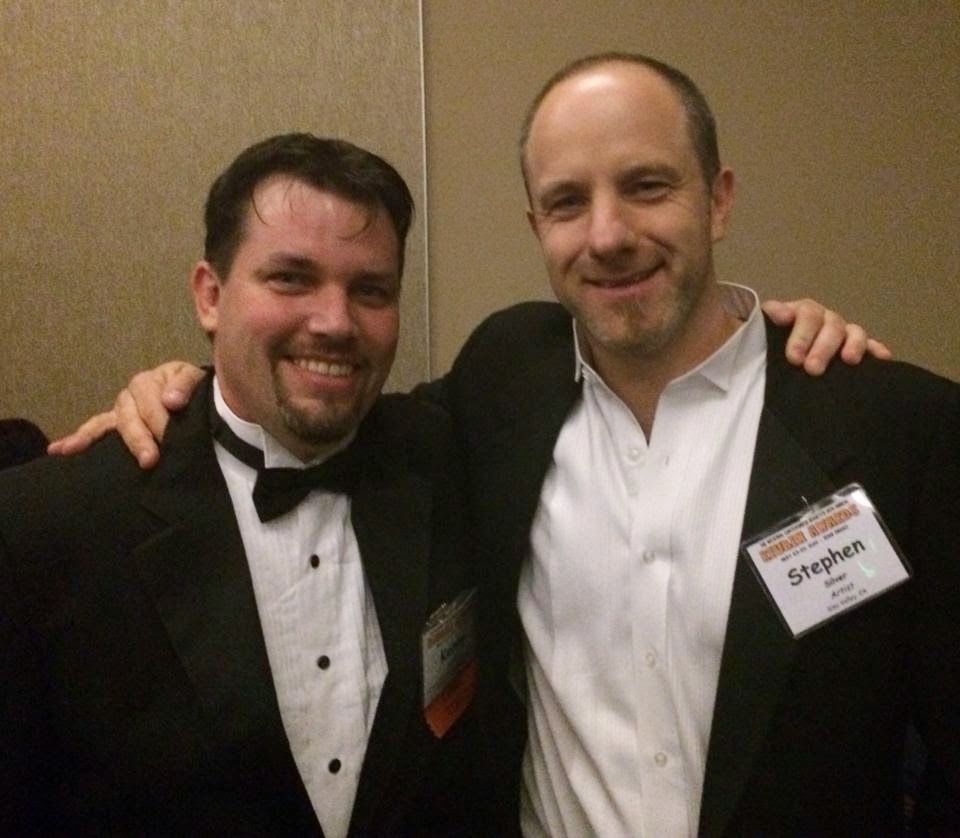 At the after party. Me and one of my heroes, Stephen Silver.

I didn't sleep at all that night. I was so thrilled with spending a day with such remarkable people, and looking forward to what lied ahead.

Here's where I'm most proud of being a member of the National Cartoonists Society. On Sunday morning, a group of NCS members drew for Wounded Warriors at the Naval Medical Center. Then even more artists went to the USS Midway and drew for the public in two shifts. 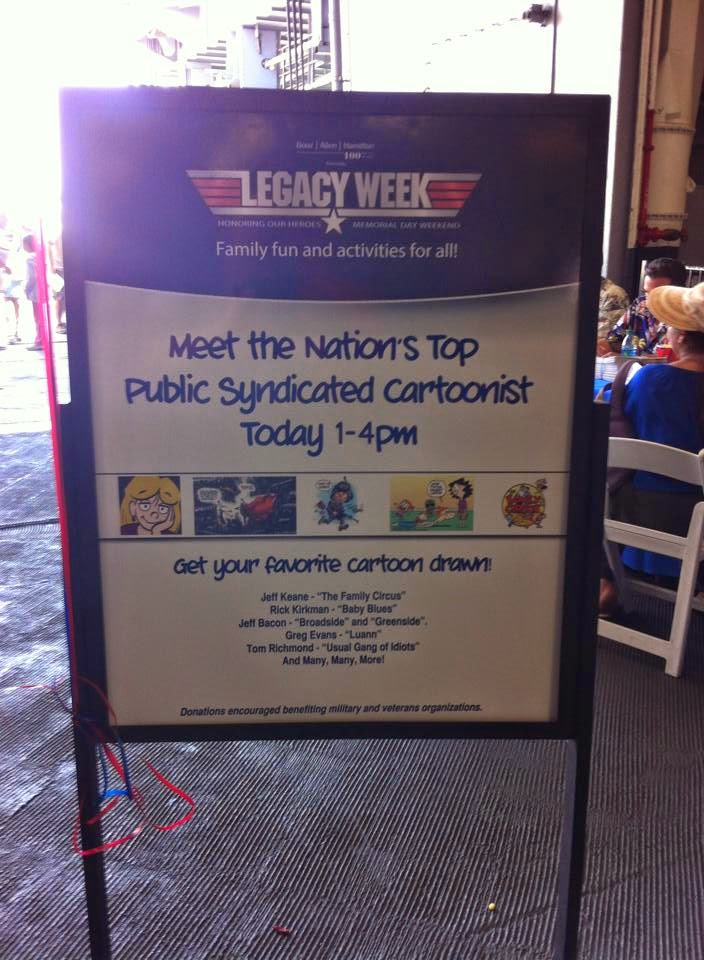 I was in the first shift, but was having so much fun that I stayed for the second shift as well.
For the first shift, I drew next to Kenosha's own John Hambrock and MAD legend, and reason I got into caricatures, Sam Viviano. 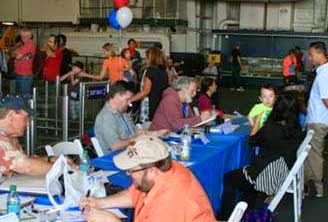 This is me next to Sam. 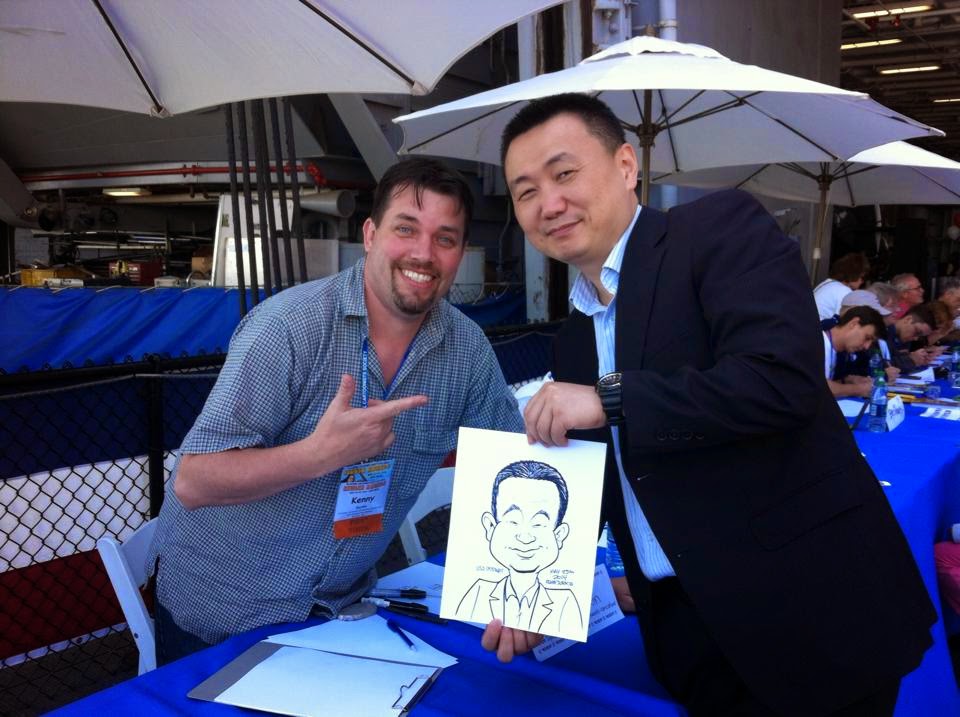 I mostly drew caricatures. I would've been happy drawing anything though.

For the second shift, I sat next to Wayno. 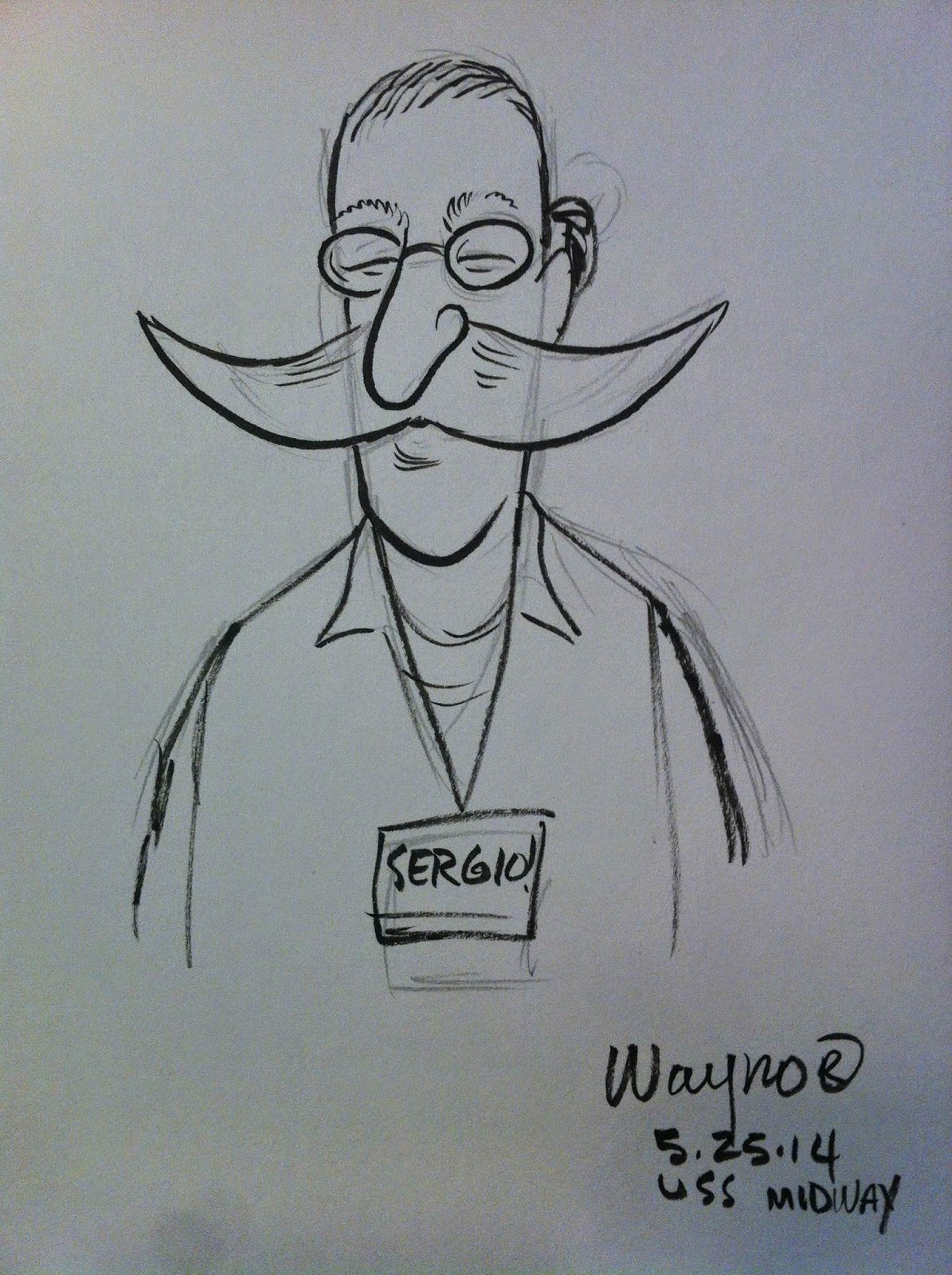 I was delighted when he gave me this caricature that he drew of Sergio from memory.

When the event wrapped up, we piled into our shuttle and went back to the hotel. We had a bit of time to refresh and then we went back to the USS Midway for a private event just for us on the deck. 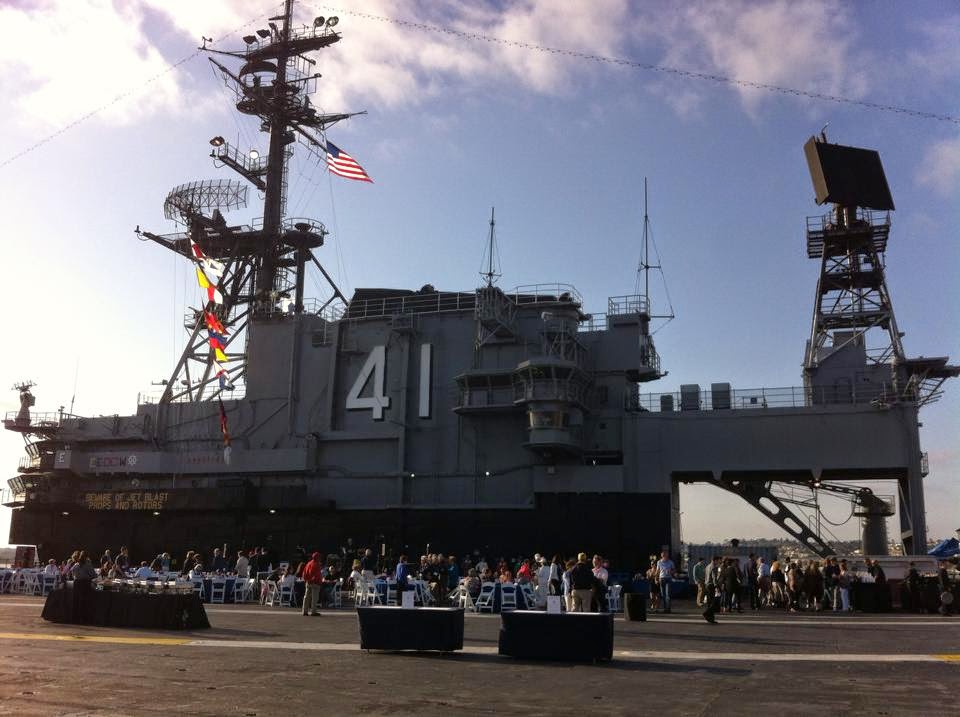 What a wonderful opportunity. We had the place to ourselves! 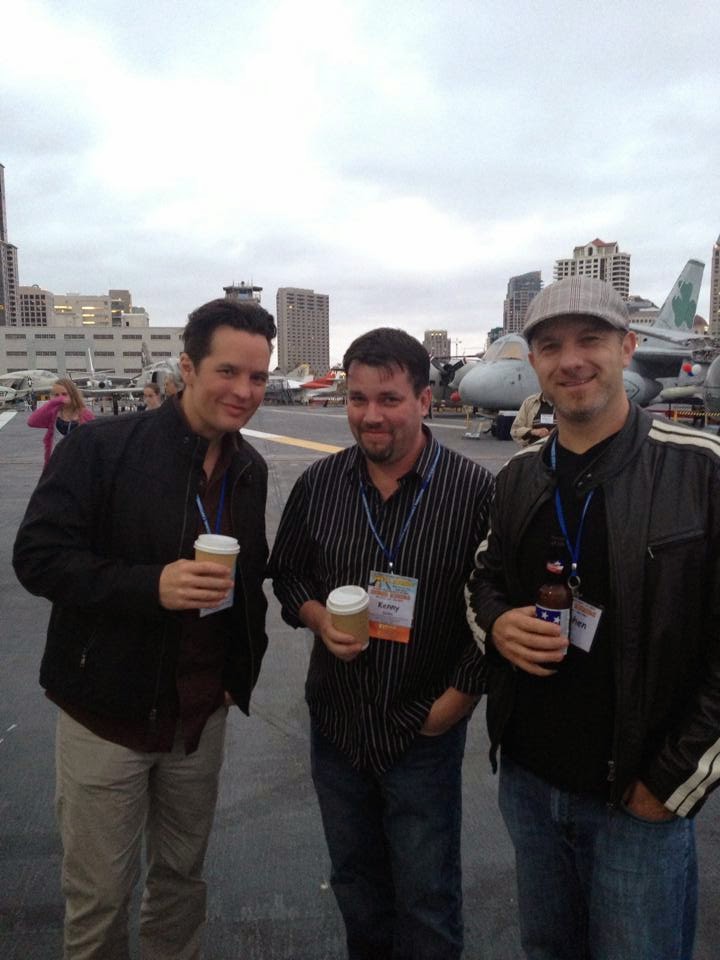 Hanging out with my NCS "sponsors" Keelan and Steve. I couldn't have become a member of this remarkable organization without them.

It was the NCS's  last night together, and I went from being intimidated in the beginning to being inspired and accepted. We finished out the night with one final after party at the hotel and then it was off to the airport for most of us the next day.

What an amazing weekend. It truly changed my life. It was one of those magical moments in time where you know you are on the right track. I returned home refreshed, energized and ready to succeed and thrive as a cartoonist.  I have nothing but admiration and affection for the NCS, and I'm grateful for President Tom Richmond and the rest of the officers as well as the members and everyone involved with putting the whole thing together. You've made me a better artist, and a better person.

Next year the Reubens will be held in Washington D.C. I'm already planning my trip.
Posted by Kenny Durkin at 2:51 PM