Hello, my name is Inigo Montoya...

This week's Toon Weekly challenge was to do an animated version of a 1980's era movie. There were no requirements beyond that, so in classic Kenny Durkin fashion, I chose to work under some self-imposed limitations and make things unreasonably more difficult for myself.
I decided I could not portray any movie that had already been adapted to animated form. This immediately decreased my options because in the '80's EVERYTHING was made into a cartoon. Movies, television shows even toys. There was a Rubik's Cube cartoon. RUBIK'S CUBE! I'm not kidding!
Turns out a lot of my favorite movies were made into cartoons. Back to the Future, Beetlejuice, Bill and Ted's Excellent Adventure, Ghostbusters, Karate Kid, The Never Ending Story, Police Academy, Rambo, Teen Wolf, Robocop, etc. Steve Silver recently re-imagined The Goonies perfectly, the Blues Brothers made a brief appearance in animated form, and there is a Spaceballs cartoon in the works.
So that left Star Wars (nah, too easy) Indiana Jones (ditto). I went to my DVD library for ideas and then it hit me. These guys... 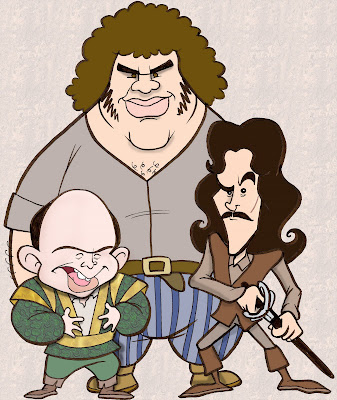 If you don't know, they are from The Princess Bride. It's an unfortunately titled film in that it sounds like it's meant to be viewed by four year old girls. In reality it's charming, goofy and fun. By definition, a perfect '80's movie. These three had a great chemistry and look, so I decided to chose them for this week's submission.

In the end, the actual time spent executing the piece was less than the time planning it out. That's what I get for having obsessive-compulsive tendencies, I suppose. On to the next challenge!

Such a cool pictue. Can defintiely see it animated. The characters really reflect the live version actors. Awesome!!!

and this is why I hate to even show my entries. Gorgeous. You nailed them all. You loose lady you!

Yeah, yeah, you and Keelan both.


Dread Pirate Weslye...er..Roberts would have been fun too! 6 fingered man, wait don't get me started...

Three Amigos.Yeah that was a great miss of choice too. Still, I love this one.
And as for the Indiana Jones toys....well you know there are still three shopping days left until Christmas. And that would like mighty purty all built in my studio.

wow, it is crazy that you can capture their likeness with such simplicity.