The Muppet Influence: Part one

The Threadless Muppets Design Challenge is still in full swing, but you only have a few more days to vote for my design. 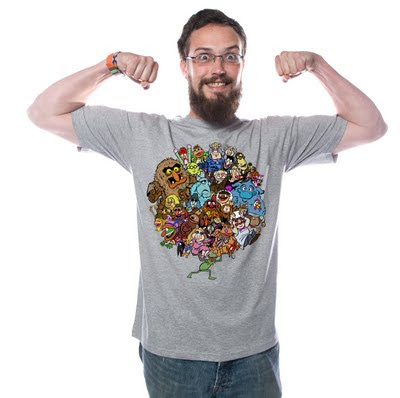 Make sure you give me a 5. I appreciate it!

For the next few days I'll be sharing with you why the Muppets and specifically Jim Henson are so significant to me. I'm starting at the beginning. All the way back to 1971.

I've always been an artist. My earliest influence can be traced back to the Muppets and the genius of Jim Henson. When I think about my life and the milestones I reached through the years, I can see some strong parallels with the growth and development of the Muppets.

In 1969, a new television show called Sesame Street hit the Public Broadcasting airwaves aimed primarily at educating preschoolers. It's combination of a strong visual style, fast-moving action, humor, and music as well as animation and live-action short films, made it an instant success. But the breakout stars were Jim Henson's puppet creations. The Sesame Street characters made learning FUN.

Two years later in 1971, I was born. My older sister had already been watching Sesame Street, and it wasn't long before I was watching it with her.

Remember kids, this was the early '70's. There was no cable television, no internet, no VCR's. We didn't even have UHF then. There were the big three networks, ABC, NBC and CBS as well as PBS. Most kids could only watch Sesame Street once on the day and time it aired. Sure, I also enjoyed Mister Roger's Neighborhood, but X the Owl, Daniel Striped Tiger, King Friday and the rest of the characters in the Neighborhood of Make-Believe were just puppets; the guys on Sesame Street were REAL. I had the great fortune of living in Southeastern Wisconsin and we were able to get the television signal from both Milwaukee and Chicago, so we had TWO stations of each network (as well as WGN in Chicago for when I wanted to watch a Bozo show). That meant that I could see Sesame Street TWICE a day on channel 10 and on channel 11.

But that wasn't enough for me. I loved the characters on Sesame Street. I felt like they were my friends. When the show wasn't on, I missed them. Back then, there was very little merchandise surrounding the show, nothing like today where various Sesame Street character toys, books, clothing and games are abundant. I just wanted to be with those characters when I wanted to. So I thought I could try drawing pictures of them.

What an amazing experience! I was able to still see my friends even though the show wasn't on. It turned out that I LOVED drawing! My earliest memories of drawing are of me making pictures of Grover and Kermit. I wanted to draw all of the characters from memory, Big Bird, Oscar, Cookie Monster, Bert and Ernie, Snuffleupagus and Sam the Robot.

My mom made me a Cookie Monster puppet. It's the first puppet I ever owned and I instantly wanted to be a puppeteer when I grew up. I still have him too: 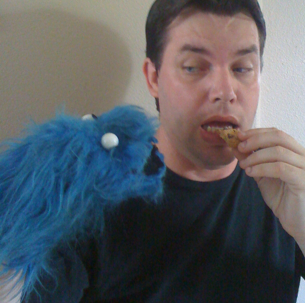 I also still have the old Fisher Price Little People Sesame Street playset. I hang on to everything! 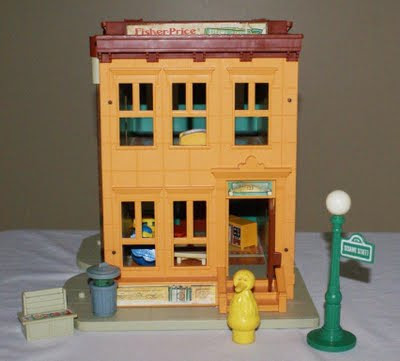 Puppetry and playing never stopped me from drawing...or learning. While the rest of the kids in Kindergarten were learning their alphabet and the sounds the letters made, I was already reading, thanks to Sesame Street.

I LOVED that show. It had such a wonderful combination of music, humor, education, animation and entertainment. The Muppet characters were so alive, tender and very, very funny. Frank Oz and Jim Henson were geniuses at their craft, and through their characters, made some of the funniest comedy duos ever. Check out Jim as Kermit and Frank as Cookie Monster:

Of course, I couldn't watch Sesame Street forever. As I entered first grade, I realized that it was time to move on. But I was going to miss the antics of those crazy Muppet characters. Fortunately in 1976, a new show was about to air...


P.S. DON'T FORGET to vote for my design at the Threadless Muppets Design Challenge and be sure to give me a FIVE!
Posted by Kenny Durkin at 10:16 AM

I had that Fisher Price Sesame Street playhouse too! I also had an Ernie doll while my brother had Bert.

AbrahamLove: I had a hard time choosing just ONE Sesame Street clip to show, there's a TON of really funny stuff (some of which I've never seen before), but this was one of my favorites.

Also, the Cookie Monster Cupcakes have made their way to the top of my list of desserts I HAVE to make! Thanks for the link!

Jason,
The Bert and Ernie puppets...were they the ones with the vinyl heads and hands? I wanted those SO BAD when I was a kid. My friend had an awesome Grover puppet when we were kids which gave me severe "Grover envy".