I'm currently competing in the Fraggle Rock art contest at Talenthouse. Yesterday I posted the final piece, today I'll begin explaining my process in its creation.


The second I heard about the contest, I knew I wanted to enter. Immediately, my thoughts turned to the design. Fraggle Rock was created to appeal to a global audience. It aired in many countries and languages, so I knew I didn't want to have any text. The overall goal of the show was to promote coexistence; cultures that were vastly different but still able to live together. I wanted a design that conveyed that symbiosis. I thought of holding hands, circles of communities. I thought of the characters, the size, textures and colors.

With all of that in mind, I thought of circles of these colorful characters, overlapping and radiating outward, much like a kaleidoscope. I knew I wanted the 5 main Fraggles in front, a second layer of Doozers, Fraggles and other characters, and a final layer of the giant Gorg family. I knew the only way that I could do this was to draw the characters in layers and then composite them in Photoshop. This is my initial sketch. 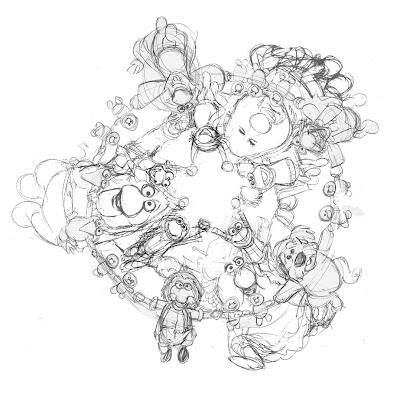 Not bad, but no matter what I did, the Gorgs were being covered up too much. Unless of course, I made them huge. But then the 5 main Fraggles became lost in the design. I wanted them to be the primary focus of the piece. I kept working on it, but I just couldn't make it look right.


If you struggle too long on a design, sometimes you have to come to the realization that the design probably isn't strong enough. I attacked it from a different angle. I kept the characters and the theme, but pushed the Gorgs waaaay back, and made them part of the inner star shape that the main Fraggles made with their arms. This pushed the main 5 to the front and I didn't have to cover up the Gorgs. 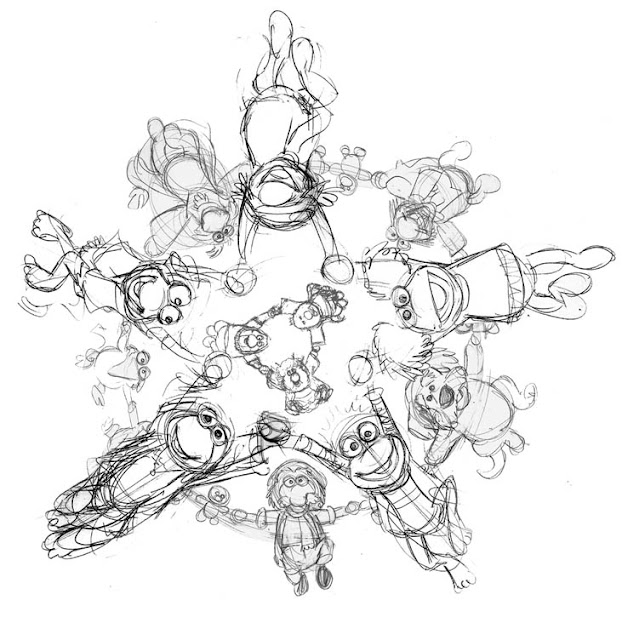 With the design in place, I was ready to move on to the next step, which I'll show you tomorrow.