Jett is quite the comedian, but I'll get to that in a minute. 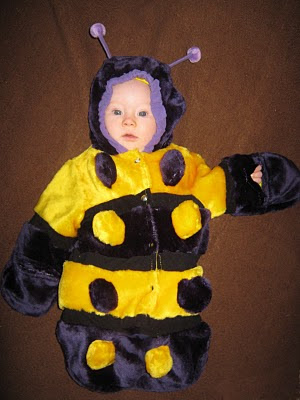 Jett got a package in the mail the other day. Somehow he knew it was his, because when we opened it, he practically dove into it. It was a box of new outfits from his Uncle Chris and Aunt Leslie. Among the cute clothing was a little bee costume for Halloween. We found it irresistible and had to dress him up in it and take photos.

We're not sure why, but between the bottom two legs of the bee, there is a small, horizontal slit in the fabric. Perhaps its for ventilation, but Jett found a funnier use for it. The picture shown above has actually been doctored in Photoshop a bit, below is the actual photo. 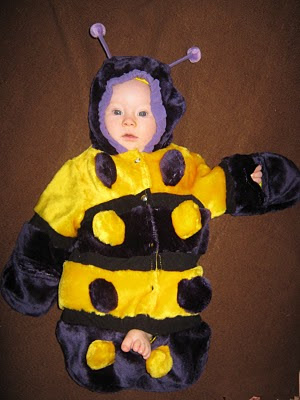 I'm pretty sure bees don't actually have five weenies, but I do know from now on, I'll never look at a bee the same way again.
Posted by Kenny Durkin at 6:58 PM

Labels: The Chronicles of Jett