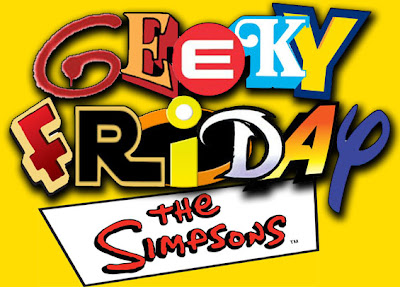 Today's Geeky Friday post is of my Simpsons collection. Several years ago, Playmates released the World of Simpsons line and at the line's conclusion had produced over two hundred different figures ranging from the popular to the very obscure. They had screen-accurate sculpts and accessories, and an innovative feature (called Intellitronics) that made it possible for the characters to "talk" when attached to an "environment", a backdrop or playset produced specifically for and with the figures.
I love the Simpsons, but came to the action figure line a bit late. I realized the enormous scope of the line and vowed to limit my collecting of the Simpsons figures to the essentials.

I have the core characters, the Simpson family themselves, and some of my favorite characters like Groundskeeper Willie, Bleeding Gums Murphy, Apu and his octuplets, Comic Book Shop Guy, Professor Frink and others. I think my favorite has to be Stephen Hawking. An ACTION figure of Stephen Hawking?!? 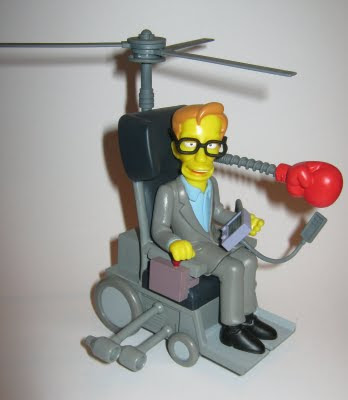 Professor Hawking did appear on the Simpsons (and Futurama as well) and even did his own voice. I love that the figure was done with his blessing

I'd still like to get Kang and Kodos, Sideshow Bob, and a few others but for the most part I'm satisfied with the Simpsons collection I have. Be sure to tune in next week for another edition of Geeky Friday and hey, "Eat my shorts, dude!"
Posted by Kenny Durkin at 10:52 AM