FINALLY the winner for the Threadless Muppets Design Challenge has been chosen. 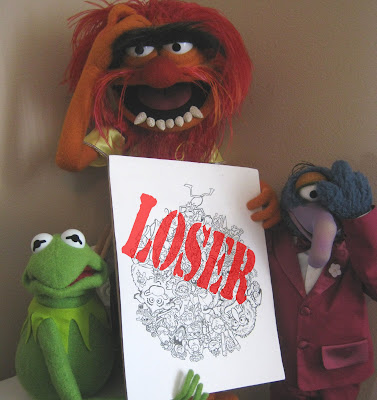 It wasn't me.
I didn't expect to win (though it would have been nice).
I've entered quite a few art competitions. I enjoy participating in them, they give me a chance to grow and learn as an artist. For me, winning is secondary. I want to challenge myself and see how I rank among other artists.
The Threadless Muppets Design Challenge was a great opportunity for me to push my boundaries. I took on a complicated project and executed it in an expeditious manner. I learned how to promote and campaign for my artwork. Again, I didn't expect to win.
That said, The Threadless Muppets Design Challenge was not without its faults. In fact, I found it to be one of the most frustrating competitions I've ever been involved with and it's going to take a lot of convincing for me to enter another Threadless competition in the future.

Here are the top ten problems with the Threadless Muppets Design Challenge.

10. Designs not fitting the required theme "Friendship"
The approval process was horribly inconsistent. The theme was to revolve around the concept of "Friendship." Entries not keeping with the theme should have been immediately disqualified, but weren't.
9. Sesame Street /violent/adult parodies allowed.
Sesame Street characters are not Muppets. Any images containing Sesame Street characters should have been rejected. And how did Muppet parodies of violent or adult movies like The Hangover, Pulp Fiction, Resevoir Dogs, Shaun of the Dead and Alien get accepted?
8. Designs which manipulate stock Muppet photos.
Anyone can take a photo off the internet, run it through a few Photoshop filters and make a design out of it. The Threadless Challenge was FULL of manipulated photos. Only original art should have been accepted.
7. Scoring info unable to be viewed mid-contest.
Before the scoring process and during the first few days of scoring, the scoring information for each entry was able to be tracked. Then, about mid contest, that information vanished. THEN, a few days after scoring ended, it returned.
6. Scoring system requires signing up.
In order to be scored by the general public, they were required to join the Threadless community. I think its shameless to force people to sign up for your website if they merely want to vote on a competition. Bad form.
5.Ranking based on score.
A poor design could get a high score if the other designs are scored low. That means anyone, regardless of their design, could easily score high if they got a bunch of their friends to score "5" for them and "1" for every other design. A better, more fair system would have been to score the top 5 designs and that's it. The design with the most votes wins the popular choice.
4. One winner- No consolation prize or second place.
Winner takes all? What about a second place or honorable mention?
3.Same entries showcased when designs are viewed "randomly."
When you wanted to view individual designs in a random fashion, or when you went to the main scoring page, the same select designs were always showcased. They never changed. This seemed like a deliberate attempt to stack the scoring in favor of certain designs.
2. An incredible lack of communication on the part of Threadless.
The credibility of Threadless was constantly in question because of their poor communication. The winning design was to be announced June 27th and wasn't actually announced until July 13th. They also made (and are still making) ridiculous claims like "We received a ton of designs for the Muppets T-shirt Design Challenge — more than 1,000!" Actually it was more like 256 designs. Come on guys...

But the most egregious reason why the Threadless Challenge was so frustrating is:

1. Threadless was going to do what they wanted anyway.
What's the point of scoring and voting by the Threadless "community" if you're simply going to choose the winner yourself? Why put people through all of that? The design that won the popular vote didn't win. It's as if Threadless had the winner picked out all along.

I'm not going to stop entering art competitions. In fact, this experience has made me want to compete even more. I also have a renewed passion for creating Muppet-based artwork, and have over thirty concepts in mind. Keep coming to the Durkinworks blog for the latest!
UPDATE:
There seems to be a silver lining in the Threadless Muppets Design confusion. A forum post from the Threadless founder states:

"we are also working with disney to try to get another 10-20 designs from this challenge distributed into stores... if that works out we'll have a ton more winners!!!"

If that is true, it's great news. There were plenty of amazing designs worthy of a t-shirt. If this happens, Threadless will have redeemed themselves considerably.
Posted by Kenny Durkin at 9:33 AM

Aww shucks. Despite the problems I had fun following you in the contest. And hahaha, I LOVE the art direction of your living room muppets in this post's photo-- you should win something for that too!

Thanks, I appreciate it! Threadless has already started the process of printing additional designs. "Muppet Mosaic", the design that won the popular vote, has also been chosen by Threadless to be printed. Great news, I still have a chance!