To be a geek, in my opinion, simply means that you're way more into a certain thing than the average person. You know the history, the trivia, you collect the memorabilia, you wear the t-shirts. In short, you make something a part of your life. Your an aficionado. There are sports geeks, computer geeks, food geeks, movie geeks, television geeks, book geeks, beer geeks, you name it. I know NASCAR geeks, baseball geeks, Apple geeks, military geeks, history geeks and countless other types of geeks.

Among the many geek badges I wear is music geek. Last week's Geeky Friday entry was about my Blues Brothers collection in the "blue room." Today I will show the other half of the room, the Van Halen/Sammy Hagar collection.

This particular collection is sentimental and anecdotal and requires a bit more explanation. Hold on, I've got some stories to tell...

I've always been a huge fan of Van Halen. They combined the fierce, tight rhythm section of drummer Alex Van Halen and bassist Michael Anthony with Michael Anthony's soaring harmonies, Eddie Van Halen's virtuoso guitar playing and a charismatic front man. They were able to balance a serious hard rock attitude with a certain level of playful goofiness. I love the David Lee Roth era, but I identify more with their second incarnation when they worked with Sammy Hagar.

Sammy is one of my heroes. He's a father and a husband. Although he's made tons of money and could easily retire, he's still out there doing what he loves to do; currently he's releasing an album with the band Chickenfoot. Sammy has and incredibly high work ethic. At 65, he's still an energetic positive force who does tons of charity work and gives back to the community and his fans. Plus he makes a great tequila (Cabo Wabo), which is my drink of choice.

In the "blue room" to my left as I sit here at the computer is the Van Halen/Sammy Hagar collection. 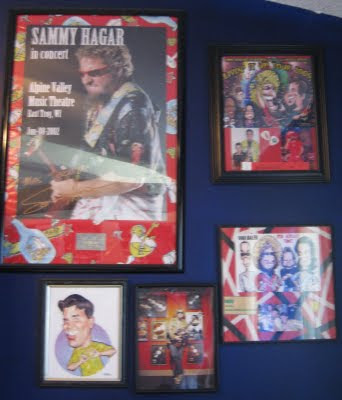 On the top left is a poster from Sammy's solo tour when he headlined with David Lee Roth. I custom made the red border with the Cabo Wabo Hawaiian print and included the ticket stub. 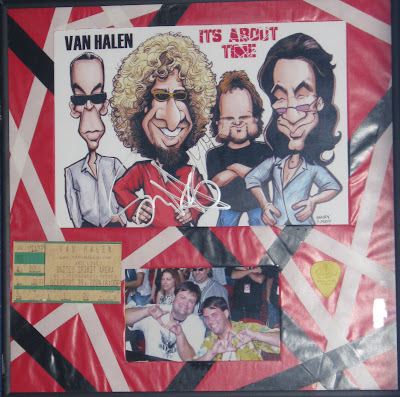 This part is from Van Halen's reunion tour with Sammy in 2004. Through a ticket package I was able to get a pre-show backstage tour, access to the sound check and front row center seats to see Van Halen in Lubbock Texas. The yellow guitar pick was handed to me by Eddie himself during the sound check. The photo is of me front and center at the concert. You'll notice my yellow Cabo Wabo tequila Hawaiian shirt. The arena in Lubbock is a dry venue, no alcohol was served. But in the middle of the concert between songs Michael Anthony noticed my shirt. He pointed at my shirt, gave me a huge grin and mouthed to me "Want some?" I nodded my head and said "Yeah!" He ran to the side of the stage and got a red cup and handed it down to me. It was full of Cabo Wabo Tequila! I felt thousands of jealous eyes looking at me and I chugged the whole thing. That's the kind of thing you have to do in those types of situations.

I had prepared a caricature of the band in the hopes of having them sign it (or at least SEE it.) During the concert, I was able to get both Sammy Hagar and Michael Anthony's autographs on it, and at the end of the concert, one of the cameramen swung around as I held it up and my caricature was huge on the big screen behind the band. 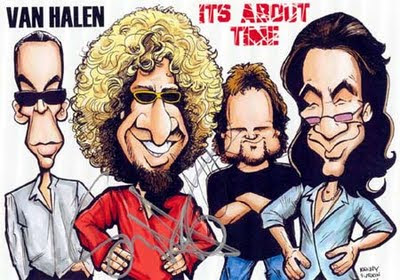 I was officially the fifth coolest guy in the room.

Directly to the left is a picture of Sammy that came with the pre-order of his autobiography RED. Next to that is the fantastic caricature Robb Miller did of me based on the photo from the Lubbock concert.

Back up to the top right is a collection of memories from Sammy's solo concert in Green Bay Wisconsin in 2006. 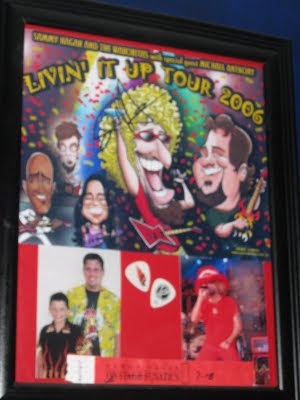 This time I took Alex. Once again I had backstage passes granting me the ability to view the soundcheck. 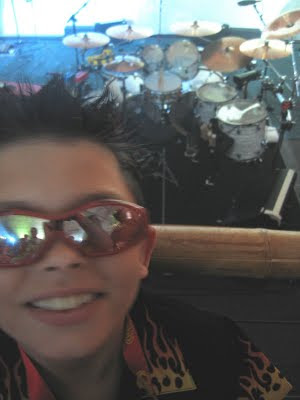 But this time my seats were actually ON the stage, right behind the drum riser. 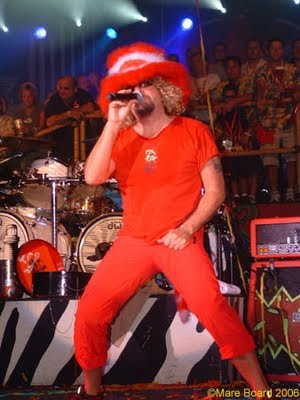 The photo on the bottom right is from another fan's perspective. You can see Alex and I right over Sammy's left shoulder. The guitar pics are from Michael Anthony, who was unceremoniously booted from Van Halen and wisely snatched up by Sammy. The top caricature is of Sammy, Mikey and Sammy's band the Waboritas. I was able to get Sammy to autograph it. 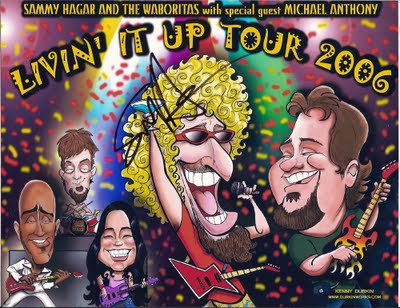 One of my favorite moments from the concert is when Sammy had some personal interaction with Alex. Throughout the concert, Sammy was always goofing around with the audience on the stage. He seemed to have a special connection with Alex though, and I was able to capture some of that on video. Go ahead and turn the sound down, the camera didn't pick up the audio very well at all (trust me, it's bad). Go to about :40 seconds in.

If you squint real hard (sorry about the quality) you can see Michael Anthony singing a song from Van Halen's first album. Sammy joins him for the chorus and when Michael goes to the second verse Sammy turns around and looks for Alex. He finds him, points to him and does the "hang loose" sign back and forth with Alex. I pan over and you can see Alex doing it back at him. What a couple of cool guys!

Last but not least, over my shoulder as I type this is my home-made Van Halen Frankenstrat guitar.

Eddie Van Halen is noted for his distinct guitar sound (the "brown sound" as he calls it) a thick, rich tone that doesn't sound like someone throwing razor blades into your ears. He perfected this sound by forever tinkering with parts from all different guitars to make it sound just right. The result was an ugly, beautiful mess and one of rock's most iconic guitars. 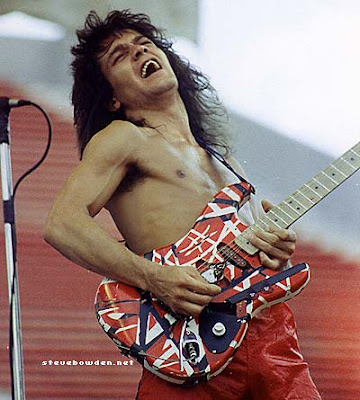 I always wanted to create a replica of the guitar and one time at a garage sale I picked up a cheap guitar for ten bucks. 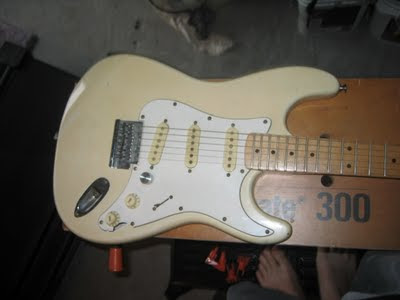 I saved it for a rainy day and around 2005 it poured buckets (my divorce). I decided to take on the guitar project as a distraction. 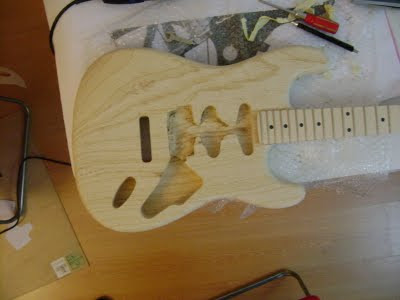 I took off all of the hardware and sanded it down. 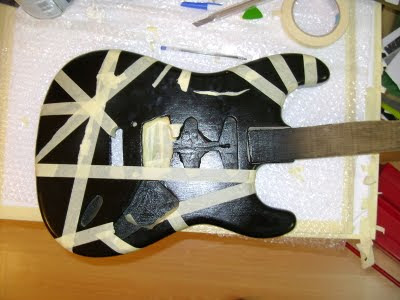 Next, I painted the body black. I used masking tape to get the black stripes just right. 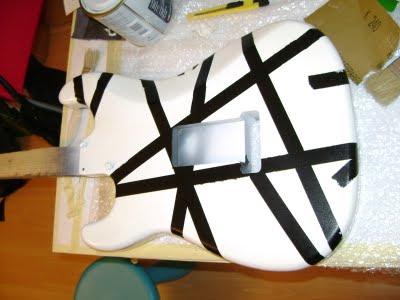 I painted it white and peeled off the tape, revealing the black stripes underneath. Next I re-taped the sections where the black and white stripes will show under the red paint. 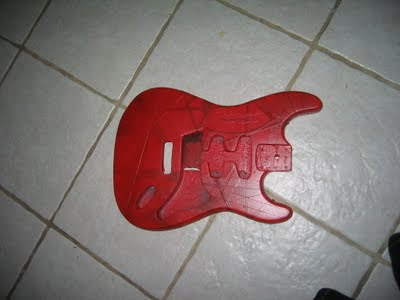 Then I painted it red. 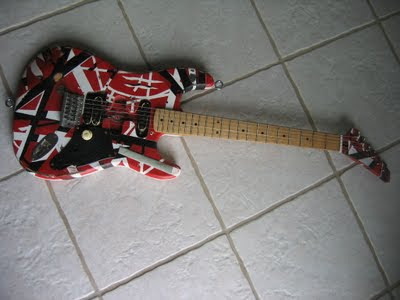 Finally, I peeled off the tape and put the guitar back together.

I pored over photos of Eddies signature guitar. I wanted to get every scratch and flaw. I sanded over the top of the paint, nicked it, burned it, kicked it down the driveway. I wanted it to have that weathered look that the Frankenstrat has.

The result is not entirely accurate, it's missing the Floyd Rose tremolo system, the pickups are wrong, it doesn't have a Kramer neck etc, (it's not even playable) but the point of creating the replica was to get it as close as I could to the original armed only with what I had available to work with. Making something out of virtually nothing. Maybe some day I'll complete the guitar with the proper parts, but in the meantime, I found this to be one of the most therapeutic projects I've ever worked on.

Until next time, "Happy Trails"

Ha! Excellent. I like the way this story developed. Excellent tequila anecdote and nice attempt at the Van Halen striped guitar :-)