You all know my number one influence is Jim Henson. I prefer not to mourn his death, but celebrate his life. Jim Henson would have been 75 today. 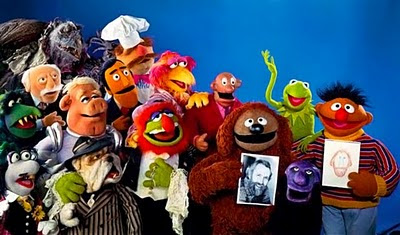 There are celebrations all over the world today. The Museum of the Moving Image in New York is showcasing their "Jim Henson's Fantastic World" exhibit. There will be a celebration at the Jim Henson statue located on the University of Maryland campus. In Leland Mississippi, Jim's birthplace, a special ceremony will take place at the Jim Henson Memorial and Muppet Museum and a bridge in the town will be renamed the Rainbow Connection bridge in Jim's honor. There are plenty more festivities at the Center of Puppetry arts in Atlanta, Georgia and special screenings in San Diego, Glenn Ellyn Illinois, and even Singapore.
Google is in on the act as well. 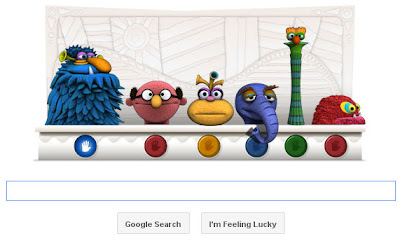 Go now, TODAY, and have some fun.

I could go on and on about why Jim Henson was such a great man and a hero to me, but I think I'll just let him speak for himself:

"I know I drive some people crazy with what seems like ridiculous optimism, but it has always worked for me." ~Jim Henson

"It's a wonderful life and I love it." ~Jim Henson

“The most sophisticated people I know - inside they are all children. ”
― Jim Henson

“If you care about what you do and work hard at it, there isn't anything you can't do if you want to.”
― Jim Henson

“As children, we all live in a world of imagination, of fantasy, and for some of us that world of make-believe continues into adulthood.”
― Jim Henson

“I don't know exactly where ideas come from, but when I'm working well ideas just appear. I've heard other people say similar things - so it's one of the ways I know there's help and guidance out there. It's just a matter of our figuring out how to receive the ideas or information that are waiting to be heard.”― Jim Henson

"My hope is to leave the world a little better for my having been there." ~Jim Henson

Happy Birthday Jim.
Posted by Kenny Durkin at 7:00 AM